CD Review: Beki Hemingway - I Have Big Plans For The World 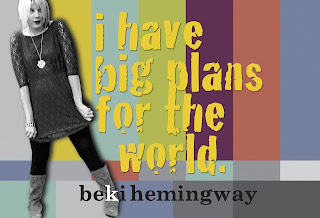 Singer-songwriter Beki Hemingway has been on the music scene for a while now. She worked with singer-guitarist Jonathan Rundman on a few of his CDs, and contributed to the Big Fish Little Fish - Emerging Women In Chicago Music compilation. Hemingway has since moved to Colorado, where she and husband, guitarist-producer Randy Kerkman, recorded I Have Big Plans For The World, with co-producer-guitarist Scott Smith and a handful of guest musicians.

Hemingway and Kerkman make a potent team on this six-song blend of power pop and Americana music. Kerkman and Smith play twangy guitars on the catchy “Lose My Mind,” as Hemingway sings, “It’s my turn now to lose my mind” like it’s something she’s been aching to do for a while. Jonathan Rundman plays organ on “Last Wish,” complementing Hemingway’s soulful vocals on a poignant tale of a housewife who has sacrificed her dreams in order to raise a family. Hemingway fills this EP with big, heartfelt vocals that recall Sheryl Crow and Vicki Peterson’s work with The Continental Drifters. She rocks out on “Northbound Traffic” and “Lay It Down,” but also connects on the touching acoustic ballad, “Finnieston.”
Posted by Terry Flamm at 10:37 PM