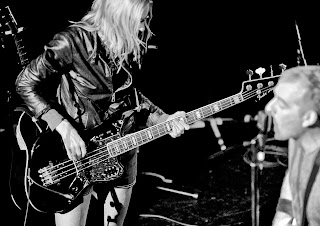 Photo of The Both from the official Aimee Mann website.

One of Chicago’s more highly regarded street fests, The Hideout Block Party And A.V. Fest,  got underway tonight with performances by Neko Case, whose new The Worse Things Get, The Harder I Fight, The Harder I Fight, I More I Love You CD is already racking up rave reviews, and soul icon Mavis Staples, who also has an impressive new effort in One True Vine. Presented by The Hideout rock club, along with The Onion newspaper, the festival continues tomorrow with Aimee Mann and Ted Leo performing under the moniker, The Both. Other acts on tomorrow’s schedule include The Hold Steady, Superchunk, Jon Langford, and The Walkmen.

Singer-guitarist Peter Case, a driving force in two of power pop’s essential bands, The Nerves and The Plimsouls, has a solo gig at FitzGerald’s on Berwyn next Thursday night.

Chicago’s vintage and authentic psychedelic rockers The Luck Of Even Hall have a record release party for their latest aural adventure, Victoria Moon, at Mayne Stage on September 20th.

Navy Pier plays host to 125 art galleries from around the world September 19th–22nd when EXPO CHGO -  The International Exposition Of Contemporary And Modern Art returns. A one-day ticket is $20, a three-day pass is $30.

There’s a bunch of familiar names on the Arcada’s half-page ad in the Illinois Entertainer this month. The Yardbirds are coming to the St. Charles venue on September 13th, with Led Zeppelin tribute band Kashmir as their opening act; Genesis Revisited with Steve Hackett will play on September 20th and 21st; Burton Cummings of The Guess Who shares a double bill with The Zombies (including Colin Blunstone and Rod Argent) on September 27th, and former Hollies member Terry Sylvester will be performing with singer John Ford Coley (from the duo England Dan And John Ford Coley) on October 11th. Other acts coming up at the Arcada include The Bodeans, UFO, Los Lonely Boys, America, Don McLean and Judy Collins, and Debbie Reynolds.

Speaking of Terry Sylvester,  I had an opportunity to meet him when he was a guest at The Fest For Beatles Fans a few years back. We talked about the Hollies concert I saw at The Auditorium in Chicago back in 1972, around the time “Long Cool Woman In A Black Dress” was a hit. Lead vocalist Allan Clarke was off pursuing a solo career at the time, and Sylvester, along with Swedish recruit Mikael Rickfors, took over the lead singing chores. Even without Clarke and Graham Nash, who had departed in 1968, it was a good concert. At The Fest For Beatles Fans, Sylvester performed about three songs, as part of a show by the superb Beatles tribute band Liverpool. It would be interesting to see him do an entire concert.
Posted by Terry Flamm at 11:45 PM