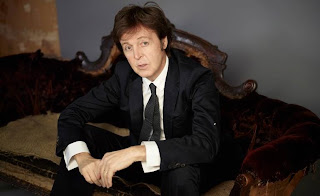 It’s no secret that WXRT air personality Terri Hemmert is an avid Beatles fan. She regularly works their songs into her 10:00 AM-1:00 PM shift; hosts the weekly program, Breakfast With The Beatles; and serves as Official MC when Fest For Beatles Fans comes to Chicago each year. Then there was the matter of her being invited to the White House when Paul McCartney received the Library Of Congress Gershwin Prize for Popular Song. Clearly, she’s had a lot on her plate when it comes to her favorite band.

Hemmert has interviewed McCartney a few times over the years, but when he called to chat about his upcoming release, New and the now-available title track single, it still seemed to be a thrill for her. Before playing the first part of the interview this past Sunday on Breakfast, Hemmert told listeners that if the day ever comes when it’s ho-hum to talk to a Beatle, she should be put out to pasture. McCartney described using several producers for the album; how he’s able to continually renew himself by working on side projects; and that it’s exciting to see younger generations getting into his music.

Afterward, when Hemmert played “New,” it was easy to see how she would enjoy sharing the song with her audience. Produced by the legendary George Martin’s son Giles, it harks back to McCartney’s Beatles output in the mid-1960s, with its infectious melody and energetic vocals. “New” is a celebration of taking chances, even though McCartney notes that he can’t guarantee the results. Considering his continued success, particularly in recent years, we might all want to dabble in some risk taking.
Posted by Terry Flamm at 11:22 PM