How Do You Depict The Rock And Roll Lifestyle? 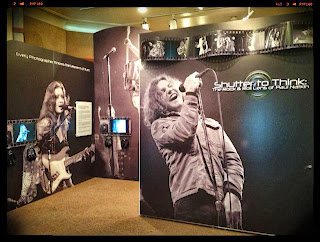 Shutter To Think: The Rock and Roll Lens of Paul Natkin has moved to the Chicago Cultural Center after being created and featured for an extended time at the Elmhurst Historical Museum. The exhibit showcases the best-known photographs taken by Natkin over several years of working concerts and various rock music events. Lance Tawzer is the curator/designer, and veteran Chicago journalist Dave Hoekstra wrote informative copy to go along with photos.

Shutter reaches back to Natkin’s early days as a sports photographer who loved Chicago Bulls games, and in a videotaped interview, Natkin describes how his first music photos came about when he bluffed his way into a Bonnie Raitt concert. Those inaugural shots indicate a natural ability for capturing the essence of a performer. Through extensive research and aggressive networking, he was soon selling his work to Rolling Stone, Creem, Hit Parader, and other rock publications. His cover photograph of Bruce Springsteen on Newsweek did wonders for the careers of the photographer and musician.

Some of the more eye-catching shots displayed in the Garland Gallery at the Chicago Cultural Center include The Rolling Stones standing together at the end of a concert; Ozzy Osbourne hoisting guitarist Randy Rhoads; saxophone player Clarence Clemons looming over a crouching Bruce Springsteen; Pete Townshend caught in mid-leap, and Prince celebrating at a birthday party where Natkin was the only photographer allowed to attend. Some of these reprints could take up a wall in an average apartment, while several others, such as shots of Iggy Pop with Joey Ramone; Cheap Trick guitarist Rick Nielsen with Smashing Pumpkins front man Billy Corgan; Al Green; The Bangles; and Brian Setzer, are a more manageable size.

Shutter To Think not only honors Paul Natkin as a photographer, it allows visitors to gain insight into his work ethic and views on the the current concert scene. The exhibit is open now through January 4th, 2014. There will be a reception open to the public from 5:30 to 7:30 on October 25th. Admission is free.
Posted by Terry Flamm at 10:41 PM