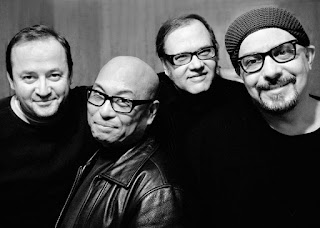 Come for the art, stay for the power pop. Photo from The Smithereens Facebook page.

Happy Birthday to Patrick Deane, who fronted one of Chicago’s first cutting edge bands back in the late 1970s. The Scraps never released a full LP, but songs like “Strike Three,” “Gossip,” and “Hits” from their 7” and 12” singles still sound vital to this day.

Director John Anderson’s Born In Chicago, a documentary about suburban teenagers traveling to the city’s south side to see authentic blues stars like Muddy Waters and Howlin’ Wolf in the 1960s, is being shown tonight at the Siskel Center. Some of those kids, like Mike Bloomfield, Corky Siegel, and Harvey Mandel would use the experience to fuel their own music. There will be a discussion session at the Siskel Center with some of the musicians after the film is shown.

The vintage car show returned for the Summer tonight in Palatine. I’m not sure who sponsors it, but there’s always an impressive collection of Stingrays, Mustangs, Jaguars, Thunderbirds, and several other classic models. Pretty much every week there’s something different, and the outdoor setting adds to the fun.

Just down the street from where the vintage car show takes place, Mac’s On Slade has become a welcome addition to Palatine’s entertainment scene. The club/restaurant gives local musicians an opportunity to perform original songs. Unfortunately, according to Bob Chiarito’s article in this week’s Trib Local, the club has been struggling due to nearby street construction. So Mac’s has been given permission by the Palatine government to hold an outdoor fundraiser to recoup some of its losses. It will be held July 20th. The only act mentioned in the article for live entertainment was The Buzzhounds.

In addition to The Smithereens performing at 5:45 tomorrow afternoon, The Wells Street Art Festival  will also have Trippin Billies at 7:30 PM. American English performs at 7:30 PM on Sunday.

It was nice seeing Simon Smith’s piece about how to hunt down rare Hollies vinyl in the May issue of Record Collector. Mr. Smith, who resides in Australia, and I swapped emails a while back after I read in another UK mag that he was writing the definitive book on The Hollies. He told me the book is still in the planning stages, and I began sending him copies of Hollies-related articles from vintage publications. Smith’s very informative article (I didn’t realize Graham Nash sang on “Lily The Pink” by The Scaffold) is accompanied by several photos of hard-to-find singles, EPs and albums. That same issue of Record Collector has Ian Ravendale’s review of a Hollies concert.

Birds Of Chicago will be recording material for an upcoming live release when it performs at SPACE in Evanston on June 27th. The newly formed folk/Americana band is led by music veterans JT Nero from JT And The Clouds and Allison Russell of Po’ Girl. The debut effort from Birds Of Chicago came out late last year.

French rockers the Plastiscines give a tip of the chapeau to the 1970s TV show Charlie’s Angels with the video for their new single, “Comment Faire.” Ot’s posted on their Facebook page.

My review of Absolute Zero, the debut release from Little Green Cars can be found in this month’s issue of the Illinois Entertainer. The Dublin-based band will pay a visit to Chicago on August 2nd when they perform at Schubas.

Sunday Morning Coffee With Jeff, the web-based comedy will return for weekly installments in September. My wife Pam and I have contributed about 50 comedy clips to SMCWJ, and I’m hoping to get together with host-producer Jeff Kelley over the next few months so we can work on some new bits.