Mr. Smith Goes To The End Of The Universe 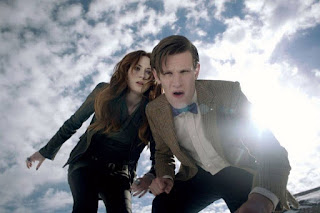 Photo of Matt Smith and Karen Gillan from Doctor Who And The TARDIS Facebook page.

When the BBC and BBC America revealed that Matt Smith will wrap up his tenure as The Doctor on Doctor Who this coming Christmas, it seemed like only yesterday when he took over the role from David Tennant with a triumphant shout of “Geronimo!” But Smith's version of the Time Lord has been bouncing around the universe--first with the Ponds and then with Clara--through four seasons. As fans well know, The Doctor's ability to regenerate allows the long-running British sci-fi series to travel on even after its lead actor has gone.

The producers have made wise casting choices since the show returned to the airwaves in 2005 after a 16-year hiatus. Christopher Eccleston, the first of the new breed, was hard-edged and cynical, but also had an engaging personality, which is essential to the character. He was one of the main reasons the relaunched Doctor Who took hold, but surprisingly, he quit after the first season. Tennant gave us a more brooding and romantic Doctor, who experienced heartbreak each time one of his companions departed. It was a winning combination that had fans and critics alike declaring Tennant was the best Doctor since Tom Baker revolutionized the role during his seven-year run.

So Matt Smith had some big shoes to fill, but he didn’t shy away from putting his own stamp on the iconic sci-fi character. His Doctor exuded a childlike wonder about traveling through time and space. He treasured his companions as playmates and loved coming up with witty responses. Asked if people ever told him he was crazy, Smith’s Doctor replied, “They never stop.” When a companion began with, “Not to criticize, Doctor - - -” he responded, “Meaning the opposite.” Then there was the quote posted by Doctor Who And The TARDIS on Facebook today: “Anybody remotely interesting is mad in some way or another.”

Smith’s Doctor could also lose his temper and deal harshly with his enemies; a swing of emotions that earned him a BAFTA nomination as Best Actor in a British television series. The writers seemed to place this Doctor in more ribald situations than any of his predecessors, and he relished those as well. So here’s to Matt Smith; his continued success in acting; and the big shoes he left to be filled by the next performer who portrays The Doctor.

Also note: Karen Gillan. whose portrayal of The Doctor’s companion Amy Pond grew progressively powerful her two and a half season on the show, has just been cast in the Marvel Studios production of  Guardians Of The Galaxy. Gillan also stars in the about-to-be released Not Another Happy Ending.
Posted by Terry Flamm at 11:17 PM