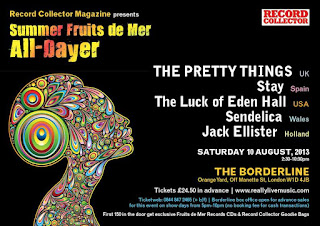 Slumgullion is a day late and a bit short this week, because I was out making rather merry watching EXPO ‘76 do its amazing repertoire of cover tunes at Mac’s On Slade in Palatine last night. What a fun show. Hopefully, I’ll have more to post on that soon.

Aaron Kupferberg announced yesterday that his Power Popaholic blog will be holding another festival this year. It takes place on September 7th at The Rock Shop in Brooklyn, NY, and features The Grip Weeds, The Anderson Council, Kurt Baker, and other acts. Tickets range from $12 to $15 and are available at The Rock Shop website. Incidentally, this news was posted on POWERPOPALOOZA, a very active Facebook page for fans of the genre. As a fellow blogger, I’m as jealous as hell, but a tip of the hat to Aaron for putting his festival together.

Pleased To Meet Them Again. The Replacements have reunited and will be among the multitude of cutting-edge acts performing at Riot Fest in Chicago this Fall. The band, which created fun and chaotic tunes like “I Can’t Wait,” “Hold On My Heart,” and “Alex Chilton,” hasn’t played lived since imploding at a 4th Of July Taste Of Chicago concert in 1991. The Riot Fest Chicago roster also includes Blondie, Violent Femmes, and Public Enemy. The Replacements will also be on the bill when Riot Fest travels to Denver and Toronto.

Help Send Luck To London. The Luck Of Eden Hall, Chicago’s long-time purveyors of psychedelic rock, will be traveling to the UK in August to perform at a Fruits de Mer Records sponsored festival with The Pretty Things. They’ve received some positive reviews over there for their efforts on the UK indie vinyl label and have turned to Kickstarter to help fund the trip. Fans can pick up some rare vinyl editions of Butterfly Revolutions Volume 1 and Volume 2 CDs, in exchange for donations. The gig, which will be held at London’s Borderline club, is a coup for Luck Of Eden Hall. Although The Pretty Things aren’t well known in America, they’re beloved on their home turf for raucous hits like “Midnight To Six Man” and “Come See Me.”

Cracker, best known for its acerbic but irresistibly catchy FM radio hit, “Teen Angst (What The World Needs Now),” will be playing The Windy City Ribfest in Chicago on July 6th. The band is also currently on tour with Camper Van Beethoven, with whom it shares a few band members.

YA From Way Back When. Aspiring writers might be interested in what actress Karen Gillan and her Doctor Who alter ego Amy Pond are up to these days. A recent roundup of Doctor Who related books in Red Eye mentioned the Young Adult novel, Summer Falls. It’s being credited to an author named Amelia Williams, which is the married name of Gillan’s Pond character. The clever concept behind this ties into Amy and husband Rory’s tragic departure from The Doctor, when they were whisked decades back in time and trapped there. Making lemonade out of lemons, Amy and Rory not only embark on a happy, if earlier life together, but Amy channels her adventures with The Doctor into a successful sci-fi Young Adult novel. As Red Eye noted, a more recent episode of Doctor Who showed a character reading Summer Falls. I read the first few pages of the novel on Amazon, and it’s well-written and whimsical.

Now on to the real life Karen Gillan. The trailer for Not Another Happy Ending, in which she plays a successful novelist with writer’s block, can now be viewed on the rom-com’s Facebook page. Looks like Gillan’s character will be exuding the same mix of charm and fiery temper as her Amy Pond character displayed while traveling through time and space.
Posted by Terry Flamm at 10:30 PM