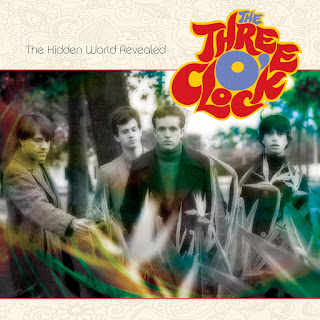 Back in the early 1980s, The Three O’Clock created a unique sound by drawing 1960s Top 40 and psychedelic elements into power pop arrangements. Some of their songs, particularly on early efforts like the Baroque Hoedown EP and full-length debut Sixteen Tambourines, had a delicate beauty reminiscent of The Bee Gees. Back then, vocalist-bassist Mike Quercio and guitarist-vocalist Louis Gutierrez co-wrote most of the material. The Three O’Clock, along with other L.A.-based bands like The Bangles and The Rain Parade, were part of a movement Quercio and his mates dubbed The Paisley Underground.

The Three O’Clock has resurfaced in the past year, with a live gig at Coachella, and an appearance on Conan O’Brien’s TV show. The nondescriptly packaged (other than the green vinyl) Live At The Waldorf (recorded in 1983) was one of this year’s Record Store Day treasures, and now Omnivore Recordings has released The Hidden World Revealed. The 20 tracks, which were originally recorded between 1981 and ‘86, include demos, alternate takes, and a promo for a local radio station. While it doesn’t offer all the great songs The Three O’Clock released over its career, it does provide a fascinating snapshot of the band in its earliest days.

“Stupid Einstein” might be the best example of a Three O’Clock song that should have topped the charts. Opening with the pensive line, “Things went oh so wrong today,” it’s irresistibly catchy and perfectly suited to its era. Like Scott Miller of Game Theory and Mitch Easter of Let’s Active, Quercio and Gutierrez excelled at composing exquisite melodies. And like those bands, The Three O’Clock could also crank up the energy level. “Jet Fighter” and “With A Cantaloupe Girlfriend” hit harder while retaining the band’s signature sound.

The experimental “A Day In Erotica,” appearing on Hidden World in an alternate version, and the Latin hymn “Regina Caeli” show The Three O’Clock’s willingness to push past its own boundaries, while the previously unreleased demo, “Sounds Surrounds” is absolutely Vaudeville with a peppy keyboards arrangement. “Lucifer Sam” has a classic new wave feel that evokes The Cure, while “The Girl With Guitar,” widely believed to be about Susanna Hoffs from The Bangles, has a spare but beautiful arrangement. “Why Cream Curdles in Orange Tea” sounds disjointed and strained, making it the collection’s only disappointment.

Elsewhere, The Three O’Clock offers faithful and energetic versions of The Bee Gees’ “My Own Time” and The Byrds’ “Feel A Whole Lot Better.” There’s also a brief plug for legendary DJ Rodney Bingenheimer, whose KROQ radio program provided an early (and possibly the only) showcase of The Paisley Underground.
Posted by Terry Flamm at 8:23 PM

You do know that Lucifer Sam is a Syd Barrett cover, don't you?

I definitely should have mentioned that. Thanks for the clarification.