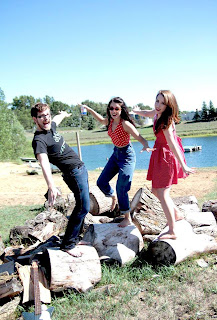 Rhythm and Blues singer T. Valentine, whose latest effort, The Vampire was released on Norton late last year, will be the headliner. He'll be backed by The Bama Lamas, and locals bands will perform tributes to other acts on the label's roster. The Cable Access program Chic-A-Go-Go intends to tape the proceedings for an upcoming episode.

The tribute format reminds me of the Halloweekend shows that have been held in October at The Abbey Pub and Martyrs. In this case, Girl Group Chicago will salute The Shangri Las (original member Mary Weiss, a Little Steven Van Zandt favorite, is currently signed to Norton); The Dyes will pay homage to the label's rock-a-billy acts; and James Porter and will take on Sam The Sham. The Polkaholics will become Detroit lounge band King Uszniewicz and his Uszniewicztones. In addition to all that music, Roctober Hurockane Relief Revue will have DJs Todd Killings and The East Of Edens Soul Express; raffles; and an auction.