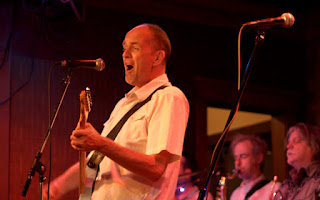 Photo of Dag Juhlin from the The EXPO '76 website. Taken by by Terri D.

Expo ’76 paid its first visit to Mac’s On Slade in Palatine this past Friday night and from all appearances, they would be welcome to come back anytime they wanted. It’s unusual these days for a live act to get just about everyone in a bar dancing, but that’s what this collection of veteran musicians achieved. And Mac’s on Slade was packed that night. They kicked off the party atmosphere at 8:30 PM and kept it going until they had literally left the building about half past midnight.

The core members are vocalist-guitarist Dag Juhlin, whose resume includes The Slugs and Poi Dog Pondering; keyboards player-vocalist Kenn Goodman, who owns Pravda Records; bassist vocalist Ralph Baumel; and drummer John Carpender. At various times, the Total Pro Horns joined them. Over the past few years, the band has built a strong following through clever on-line marketing and the promise of a limitless set list.

At Mac’s On Slade, EXPO ’76 opened with a few obscure New Orleans style tunes before moving on to more familiar fare like The Lovin’ Spoonful’s “You Didn’t Have To Be So Nice” and The Monkees’ “Daydream Believer.” Dressed in vintage clothes and hats, these guys exuded a casual sort of cool. Fun takes on Nick Lowe’s “Cruel To Kind,” Ace’s “How Long,” and “Ooh Child” by The Five Stairsteps seemed to flow naturally from them.

EXPO ’76 kicked off the second set with a peppy and faithful version of Al Hirt’s “Java.” Elsewhere, the musicians put their own stamp on famous songs; proclaiming at one point that they aren’t a covers band, but a band that uses other people’s material to express themselves. Kind of like Laurence Olivier doing Shakespeare; and they seemed to be only half joking about that analogy. Electric Light Orchestra’s “Can’t Get It Out Of My Head” was given a slower, brooding arrangement, while Gary Wright’s “My Love Is Alive” was transformed into a smoking Motown workout.

There was also an impromptu a cappella sing-along of Helen Reddy’s “I Am Woman,” and the band’s take on Bobby Day’s “Rockin’ Robin” featured a quick riff from Jethro Tull’s “Aqualung.” Closing with Roger Miller’s “King Of The Road,” EXPO ’76 passed through the crowd while still singing, and strolled right out the front door. Cool right to the very end.
Posted by Terry Flamm at 9:39 PM