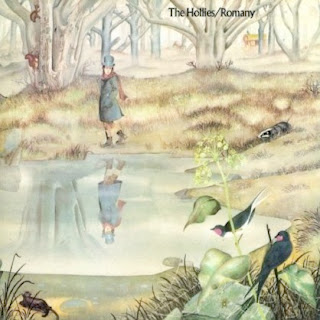 Released in 1972, Romany was the second half of The Hollies’ brief journey into harder rock. It came on the heels of Distant Light, which had spawned the hit single, “Long Cool Woman In A Black Dress.” The two albums shared the same cover art of a mysterious forest; Distant Light showing it in summertime while Romany changed the scene to the dead of winter. Some critics haven’t been fond of Romany, possibly due to its extensive use of outside songwriters, but more likely because distinctive lead vocalist Allan Clarke was AWOL at the time. Still, it does have its merits.

With Clarke off pursuing a short-lived solo career, The Hollies recruited baritone vocalist Mikael Rickfors from the Swedish band, Bamboo. Rickfors arrived as they continued to turn up the guitar power, and he played an essential role in what seemed to be an effort to mimic the vocal approach former member Graham Nash was creating with David Crosby and Stephen Stills. The CSN style harmonies were particularly impressive on the single, “Magic Woman Touch” and the ambitious title track (both written by songwriter C.H. Jennings).

Rickfors didn’t hesitate to put his stamp on Romany. A cover of David Ackles’ “Down River” was more of a solo effort, with Rickfors convincingly conveying the emotions of a man meeting his ex-girlfriend shortly after he’s been released from prison. His own composition, “Touch,” combined elements of prog rock and jazz. The catchy and guitar-driven “Wont We Feel Good That Morning” (credited to Leslie - Day) foreshadowed power pop. Rickfors’ deep vocals combined with the high harmonies of guitarists Tony Hicks and Terry Sylvester, creating a sound similar to Cheap Trick.

The other Hollies expanded their boundaries as well. Judee Sill’s “Jesus Was A Crossmaker,” a provocative song about struggling with one’s faith, was rendered with gorgeous vocals, while the exotic imagery of “Words Don’t Come Easy,” another Jennings composition, was set to an acoustic guitar and percussion arrangement. “Slow Down,” another Leslie - Day song, was a fast-paced, hard-hitting gem. “Blue In The Morning,” written by Hicks and his writing partner at the time, Kenny Lynch, sounded more like a traditional Hollies track, and was a great deal of fun.
Posted by Terry Flamm at 10:08 PM