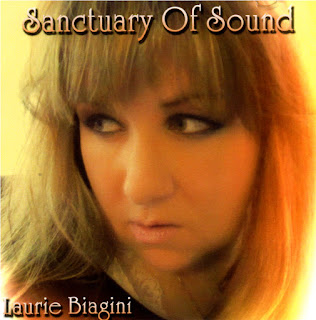 Judging from song titles like “Run To The Sun,” “Sunburn,” and “Springtime Of My Mind,” it seems likely singer-songwriter Laurie Biagini released her fourth CD to coincide with the warmer weather. Sanctuary Of Sound is like a refreshment stand on the beach, serving up easy-going arrangements, layered vocals, and enticing melodies to people looking to have fun. Like Lisa Mychols, whose Above, Beyond And In Between CD was reviewed here last week, Biagini often draws inspiration from Top 40 hits of the early 1960s.

Biagini definitely takes a hand-on approach; creating her own back-up vocals and playing most of the instruments. There isn’t a lot of variety in her approach, but each song is distinctive enough to stand on its own. The mood throughout Sanctuary Of Sound is upbeat, with the occasional satirical jab like “Gold Plated Girl,” a party song augmented by guest guitarist, Fabrizio Serrecchia. “Monkey Business,” with its jungle metaphors and tropical beat, is the only track that gets a little too cute.

The catchy “Two Of A Kind,” which also appeared on the International Pop Overthrow 2012 compilation, is a clever and touching love song, and “Beautiful World” takes an optimistic view of life’s adventures. “Sunset,” co-written with Vinnie Zummo and featuring his guitar playing and backup vocals, is a gorgeous homage to The Beach Boys, while the title track taps into Lesley Gore and the girl group sound. Biagini isn’t limited to nostalgia on Sanctuary Of Sound, though. “Rise Up” shows the power pop craftsmanship so often seen in songs by Shoes.
Posted by Terry Flamm at 10:00 PM