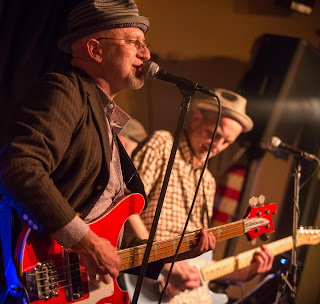 A couple of noteworthy shows happening in the Chicago area this Friday.

The Handcuffs recently announced a batch of shows they’ll be doing over the next few months while also finding time to record their fourth CD. Their busy schedule brings them to The Beat Kitchen on Belmont Avenue this Friday, where they’ll be sharing the bill with longtime friend, singer-guitarist Phil Angotti and his band. The Safes and The Differents (who are having a record release party) are also on the bill. Angotti will likely be showcasing material from his recently released CD, Life And Rhymes, and he has some top notch songs to choose from his 2011 release, People and Places. I can’t say for sure if The Handcuffs will be debuting any songs from their upcoming effort, but they do have a new guitarist, Suzie Q.

NOTE: The Handcuffs, along with The Producers and The Jeff Pritchett Project, will be taking part in the Will Rock For Food fundraiser on July 20th in Marion, IL.

Also on this Friday night, EXPO ‘76 will drop by Mac’s On Slade, Palatine’s up and coming rock club/restaurant. EXPO ‘76 is a side project for music veterans vocalist-guitarist Dag Juhlin of The Slugs and Poi Dog Pondering; keyboards player-vocalist and Pravda Records CEO Kenny Goodman; bassist-vocalist Ralph Baumel; and drummer-vocalist John Carpender, who also performs with Tomorrow The Moon. They describe their eclectic selection of cover versions as “a mental warehouse of music that houses the golden era of AM radio singles, roots rock chestnuts, new wave janglers, campfire classics, TV show themes, early ‘60s rave-ups, songs your parents know and love, made-up-on-the-spot idiotic jams and more.” As a resident of Palatine, I bid them a hearty welcome.
Posted by Terry Flamm at 10:57 PM