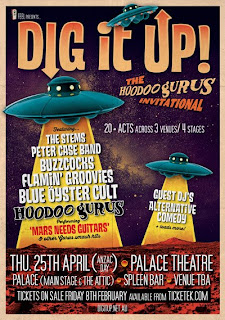 Bowe Knows Rock. Kevin Bowe, a Minneapolis-based singer-guitarist who’s bound to make a lot of people think of The Replacements with his new release, Natchez Trace, has a gig tomorrow night at Wise Fools Pub on Chicago’s north side. Fess and The Dirty Creeps are also on the bill. Bowe is currently on a tour that recently included a performance ar SXSW. He and his band, The Okemah Prophets, had some impressive guests helping out on Natchez Trace, including Nels Cline from Wilco, Scarlett Rivera, and Meat Puppets members Chris and Curt Kirkwood. Paul Westerberg from The Replacements co-wrote the energetic song, "Everybody Lies."

Peabody In The Wayback Machine. Congratulations to Doctor Who on being named a 2013 Peabody Award winner. The Peabody website describes Doctor Who as “The ever-evolving, ever-clever BBC science fiction series now entering its second half century.” The new season kicks off tomorrow night, as The Doctor welcomes a new companion.

I Can Dig It, You Can Dig It  . . . Fans of power pop, punk, garage rock, and even some spooky hard rock might want to spend the cash for a trip to Australia. Dig It Up! AKA The Hoodoo Gurus Invitational has a smashing roster of The Hoodoo Gurus, Peter Case, Flamin’ Groovies, Blue Oyster Cult, and The Buzzcocks hitting Brisbane on April 18th, Sydney on April 21st, Melbourne on April 25th, and Perth on April 28th. Several popular local acts, like The Stems, are also on the bill.

A Cheap Imitation. Critically acclaimed tribute band Tributosaurus will be performing the music of Rockford’s finest when they become Cheap Trick at Martyrs’ on April 17th.

Heart Support. Soundgarden/Audioslave vocalist-guitarist Chris Cornell will do the honors when Heart is inducted into The Rock And Roll Hall Of Fame on April 18th. Heart will be performing at the ceremony, along with guest musicians Mike McCready of Pearl Jam and Jerry Cantrell of Alice In Chains. Cornell, McCready, and Cantrell are from the same neck of the woods as Ann & Nancy Wilson, and it’s great to see them taking part. In their book, Kicking And Dreaming, the sisters mentioned how much it meant to discover that they had inspired a younger generation of Seattle musicians.

Steal This Enthusiasm. As someone who performed at the first 20 of the Abbie Hoffman Died For Our Sins festivals at the Mary-Arrchie Theatre on Chicago’s north side, I’m truly excited about the 25th Anniversary celebration coming in August. Artistic Director Rich Cotovsky, who has hosted every Abbie Fest in the persona of Hoffman, recently sent out an email announcing a change of venue for this year’s bash.

Instead of the Mary-Arrchie’s home base on Sheridan Road, the 25th Anniversary Abbie Fest will be held at The Den Theater on Milwaukee Avenue. This will allow a much greater number of theatre companies, comedy groups, and solo performers to take part, as the action unfolds on three different stages. Several acts make Abbie Fest an annual event, and Cotovsky is hoping to reconnect with some participants who’ve been away for awhile. He’s also hoping to attract some high-profile theatre groups who haven’t been involved before. I’ve never missed an Abbie Fest, and I surely won’t miss this one.
Posted by Terry Flamm at 10:27 PM