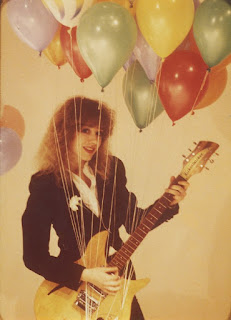 I ran out of energy about 11:30 last night before I could finish this week’s Slumgullion. So here are a few more items.

First of all, best wishes to Nancy Wilson on her birthday. Heart’s well-deserved induction into the Rock And Roll Hall Of Fame takes place on April 18th.

It’s been very encouraging to see the quality of musicians coming to the new Mac’s on Slade restaurant/club in Palatine. I caught local trio This Is This on my first visit about a month ago, and The Johnsons, a band comprised of seasoned local scene and concert tour veterans, were at the venue last night. J.B Ritchie will be performing tonight, and it’s rumored that folk singer/author/master car model maker Dean Milano has a gig coming up in April.

Vocalist-bassist Herb Eimerman has worked on a number of musical projects throughout his career, including the international power pop trio, The Britannicas. He recently posted on Facebook that his cover of the song “Strange Side Of Love” will be on the long-awaited 20/20 tribute album, Remember The Lightning. Other artists involved include former child actor Robbie Rist, Wednesday Week, Popdudes, and Jeremy.

Later this August when Mary-Arrchie Theatre celebrates the 25th Anniversary of its Abbie Hoffman Died For Our Sins Festival, the comedy group Famous In The Future will mark its own 25th anniversary by taking part in the freewheeling celebration of theatre, comedy, performance art, and music. In the meantime, Famous In The Future has a show titled Naughty Bits coming up on March 27th at The Public House at 3914 N. Clark Street.

I was in this comedy group for 20 years, and we used to often joke that we had more alumni than Notre Dame. But founding member Frank Carr, along with Desiree Burcum, Michael Hora, and Tina Teske, have coalesced into a veteran performing unit. Judging from the new group photo, it looks like actor-journalist-musician Pat Über-Critic McDonald, who performed so well with FIF at last year’s Abbie Fest, will be back for this gig. Admission is $10.
Posted by Terry Flamm at 11:01 PM