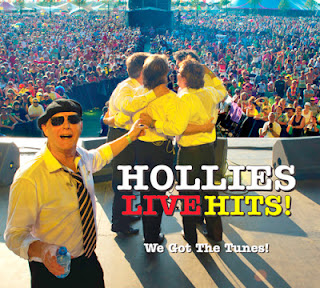 Hollies Live Hits, a 2-CD set recorded on tour throughout 2012, is now available on the band’s official website. The tracks include Top 40 hits like “I Can’t Let Go,” “Look Through Any Window,” “Bus Stop,” and “Long Cool Woman In A Black Dress,” along with newer material like “Then, Now, Always (Dolphin Days).”

For a different twist on The Hollies, check out Re-Evolution - FDM Sings The Hollies. Released on the indie Fruits de Mer Records label, it’s a 12" LP and two 45 RPM singles collection featuring 16 current indie, psychedelic, or ambient groups. All of them cover songs from the Graham Nash era Hollies, and the results imaginative and entertaining. I should have a review posted some time next week.

One week from tonight, power pop fans in Racine, Wisconsin (as well as those willing to travel there) will be ecstatic when Shoes perform live at McAuliffe’s Pub. The band ended an 18-year recording dry spell by releasing the critically-acclaimed Ignition last fall, and has a date at this year’s SXSW Fest later this month. There are reports that Shoes will be making other live appearances over the spring and summer. The Bradburys are the opening act at McAuliffe’s next week. The club is located at 3700 Meachem Road, 262-554-9695. Admission is $10.

The schedule for this year’s International Pop Overthrow - Chicago, to be held at the Red Line Tap from April 18th through the 27th, is now available. Each night offers a six-band (sometimes seven-band) showcase, and there are also daytime showcases on Saturdays and Sunday. Here are a few of the highlights: Go Time on Thursday, April 18th; Ralph Covert (of Ralph’s World and The Bad Examples) on Friday, April 19th; The Webstirs and Phil Angotti/Ellis Clark Pop Orchestra on Saturday evening, April 20th; The Unswept and The Abbeys on Sunday afternoon, April 21st; Trolley on Sunday evening, April 21st; Kevin Lee on Monday, April 22nd; The Viaducts on Thursday, April 25th; 92 Degrees on Saturday afternoon, April 27th; and The Valley Downs and The Queue on Saturday evening, April 27th.

Rock critic Greg Kot had a very interesting piece in yesterday’s Tribune about the city of Chicago establishing a two-man office devoted to promoting and supporting local musicians. David Chavez and Dylan Rice are currently working on a Chicago Music Summit, which will take place at the Cultural Center on September 20th. No definite word on what this event will offer, or what other plans the duo is working on, but so far, this seems to be a promising development.

Elgin, IL has already established itself as a city where zombies run loose on Halloween, and now it’s getting into robots. Calling All Robots is a pop up art installation scheduled for April 5th at the Artspace Lofts on the corner of Spring and Fulton. Artists from around the globe will be showcasing their 2D and 3D representations of the mechanical beings, and Elgin’s own robotics club, Got Robot will provide a demonstration. There’s still time for artists to submit material via an online application. And now here’s a clip robot dog K-9 and the beguiling Leela from Doctor Who.

Fans of the late Davy Jones might want to consider making a donation to the newly formed Davy Jones Equine Memorial Foundation. The Monkees musician was known for his love of horses, so this could be a fitting way to honor his memory.

Chicago-based filmmaker Michael Smith will present Portuguese director’s Manoel de Oliveira  surrealistic film, The Cannibals, at Facets Multi-Media on April 27th. Smith, the President and CEO of Lost Tree Productions, has created a seven-minute tribute to de Oliveira that can be viewed on YouTube.
Posted by Terry Flamm at 10:50 PM