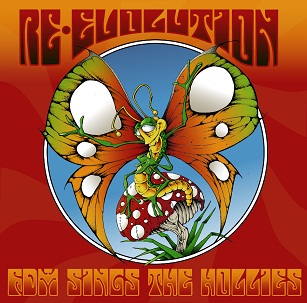 Long-time Hollies fans are likely to approach this new tribute album from the UK vinyl-only independent label, Fruits de Mer Records, with a bit of trepidation. Re-Evolution doesn’t seem to be the marriage made in heaven that Eggbert Records achieved in 1995 when it rounded up elite power pop artists like The Posies, The Loud Family, Material Issue, and Mitch Easter to have a go at interpreting classic hits on Sing Hollies In Reverse. By contrast, the most familiar act involved with Re-Evolution is probably The Bevis Frond.

What a pleasant surprise then to find that Re-Evolution, which is packaged as an LP and a 45 RPM single, is a smashing success. Sixteen artists, from England, America, Russia, Sweden, and Portugal, contribute tracks and not a single one misses the mark. This aural tapestry is rich with imaginative choices, and any Hollies fan who listens with an open mind will surely have it blown.

The most bizarre moments come when moonweevil turns “Bus Stop” into a chill instrumental reminiscent of the music by the French duo, Air. It’s radically different from the Graham Gouldman-penned hit single, but sophisticated and cool. Hi-Fiction Science sets the vocals of Maria Charles above a tribal arrangement on “King Midas In Reverse,” while King Penguin crafts an exotic “Dear Eloise” with sitar and tablas.

Most of the other artists on Re-Evolution focus on obscure B-Sides and album tracks from the Graham Nash era; expanding on the originals’ psychedelic elements. Beautify Junkyards begin the trip with an echo-laden and dreamy version of “Butterfly.” It’s the only song that is done twice on Re-Evolution. The duo Us And Them create a hypnotic version featuring Britt Rönnholm’s vocals and a traditional folk arrangement augmented with keyboards.
Posted by Terry Flamm at 11:09 PM