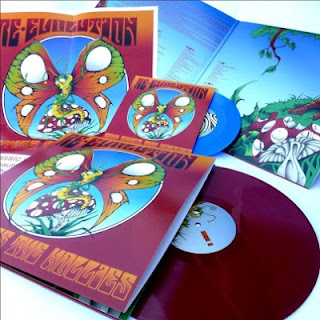 The second half of my review of Re-Evolution, the Hollies tribute LP from the UK independent label, Fruits de Mer Records. Note: Promotional clips for a number of these tracks can be viewed on the Fruits de Mer YouTube channel.

Listening to Re-Evolution, it’s fun to anticipate what approach the next artist will take. For example, The Re-Stoned rampages through “Then The Heartaches Begin” like a 1970s metal band, while auralcandy offers an enticing blend of pomp and Austin Powers style lounge music on “Heading For A Fall.” The Neutron Drivers  have a ball giving “Water On The Brain” a playful 1960s/vaudeville treatment. Other acts celebrate the sheer pop expertise of The Hollies while adding their own interesting flourishes. The Higher State infuses “Don’t Run And Hide” with power pop and a hint of garage rock, while The Gathering Grey and Langor deliver exquisite takes on “Postcard”  and “Everything Is Sunshine,” respectively.

The Bevis Frond  adroitly mixes acoustic and electric guitars on the tough luck tale, “Hard Hard Year” and Sky Picnic transports “Try It” to San Francisco’s Haight Ashbury intersection circa 1969. The Electric Stars lower the saccharine level of “Jennifer Eccles” by imagining how George Harrison might have recorded it during his solo years. And a listener can throw on the headphones and drift away to the psychedelic ambience of “All The World Is Love” by The Seventh Ring Of Saturn and “Elevated Observations” by Jay Tausig.

A few years ago, some music critics questioned The Hollies’ induction into the Rock And Roll Hall Of Fame, claiming the band’s success was limited to hit singles. Fortunately, the artists associated with Re-Evolution knew there was a wealth of material to be found on The Hollies’ albums as well.