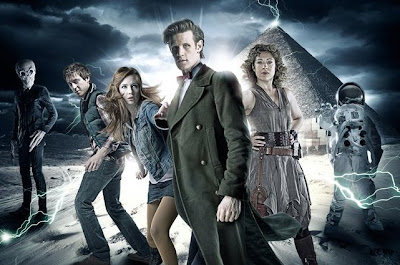 Award-winning mayhem from Matt Smith (center) and Karen Gillan (third from left). Art from the Doctor Who Facebook page.

Paperback Writers. Three regulars from my writers group have recently published Young Adult novels. Cherie Colyer will host the physical launch (the virtual launch was about a month ago) for her paranormal tale Embrace, tomorrow from 10:00 AM to noon. I did an interview with Colyer for the Sunday Morning Coffee With Jeff Internet show last Halloween. The location for the Embrace launch is the Starbucks at 181 Barrington Road in Schaumburg. Embrace is also available online from Amazon, Barnes & Noble, and Omnific Publishing.

My interview with Susan Kaye Quinn about her paranormal Young Adult novel Open Minds should appear on SMCWJ either this Sunday or the next. Open Minds recently made it into Amazon’s Top 100 List of Science Fiction books.

And I’m planning to interview Marian Manseau Cheatham in the near future about her historical novel Merely Dee. The book is based on Chicago’s tragic Eastland Disaster in 1915 and follows the emotional struggles of a young survivor who lost co-workers and her best friend to the incident. Merely Dee is available at the iUniverse website.

We're hoping for more published writers to emerge from this talented group.

I Want You To Want To Tune In. WXRT is airing a vintage Cheap Trick concert from 1977 this Sunday night at 8:00 PM. Fans who are not in the Chicago area can stream the show via the station’s website.

Cool Minds Think Alike. On the most recent edition of his syndicated radio show, Underground Garage, Little Steven Van Zandt chose “I Woke Up” by the Milwaukee-based power pop band Trolley as his Coolest Song Of The Week. Earlier this month, I picked Trolley’s Things That Shine And Glow as one of my Top 10 Releases of 2011.

Super Opportunity. Crawpuppies have moved into first place among the Indiana-based artists competing for a chance to join Jane’s Addiction and The Roots at Rolling Stone’s Rock And Roll Fan Tailgate event on February 5th in Indianapolis. Fans can vote for their choice at the Rolling Stone Volkswagen Super Band website. Crawpuppies released the impressive CD, World’s Much Bigger last year.

Quid Prose. The vibrantly painted Cirque du Soleil promotional bus pulled up outside the Whole Foods store in Palatine yesterday afternoon to help spread the word about its upcoming Quidam performances at the Sears Centre Arena in Hoffman Estates from Febraury 8th - 12th. Workers set up big screen TV’s in the store’s cafe to show a behind-the-scenes video and handed out free packs of popcorn.

Visitors were able to fill out tickets for a chance to win free admission, but there was no sign of the green screen for taking Quidam-related photos, as mentioned in a press release. One of the workers explained that the winter bus events have to be scaled down due to weather conditions. The bus will be at the Whole Foods in Schaumburg (750 Martingale Rd.) this coming Sunday from 11:00 AM to 2:00 PM.

Post Puerto Man. Christa Meyer, formerly half of the critically acclaimed Chicago duo Puerto Muerto, has just released a solo effort under the moniker Man Is Man. Writer Jessica Hopper recently reported in the Chicago Tribune that Smoking Popes guitarist Eli Caterer is one of the backing musicians on Meyer’s Those Birds Will Eat Us CD.

Two Doctors In The News. Congratulations to current Doctor Who star Matt Smith on his best Male Drama Performance honor at Britain’s 2012 National Television Awards. Smith’s co-star Karen Gillan was chosen as best Female Drama Performance for her role as Amy Pond. Meanwhile, David Tennant, who portrayed the galaxy-trotting time lord just prior to Smith is starring in the new romantic comedy, The Decoy Bride.

Sick Humor. Seth Rogen’s recent comedy 50/50 was based on the concept of a cancer patient using his illness to meet women. Veteran stand-up comedian Len Austrevich is also taking a comedic angle on cancer, but for the purpose of cheering up kids like his son Miles who have the disease. Austrevich and his son have set up a website so they can amass a collection of 5,000 jokes from contributors around the world. Why? So Miles can get his mind off his painful therapy by having a good laugh.

As reported by Brett Schweinberg on the My Suburban Life website, they've received over 100 entries since the January 1st kickoff. Even some celebrities, like Jay Leno, Amy Poehler, and Will Arnett have joined in. The effect can clearly be seen on the face of Miles Austrevich in a video where he talks about how much he appreciates the efforts of friends, stars, and total strangers to help him feel better.

Len Austrevich recently posted an ad on CraigsList under TV & Radio seeking production help, particularly from writers, editors and webmasters. Those interested in joining the cause can find more information at the Jokes For Miles website.

Lots of great things happening. Thanks for including information on Embrace!