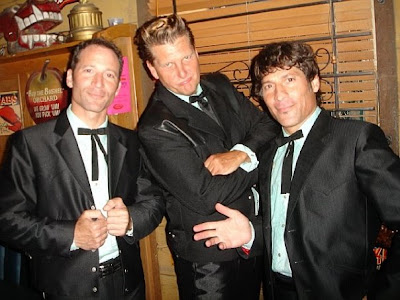 The Neverly Brothers are performing at Cutting Hall tonight in my home town of Palatine at 8:00 PM. The trio’s entertaining rock history lesson/live performance is well-suited to this classy little venue, which frequently presents concerts, stage productions, and independent films. Tickets are $20, $15 for seniors or students.

Speaking of flicks at Cutting Hall, Blue Whiskey Cinema presents its next monthly screening of award-winning indie films on January 16th, at 7:30 PM. The once a month series continues on February 15th, March 7th, April 17th, May 16th, and June 13th. Each of those dates is a Wednesday. See the Blue Whiskey website for more details.

Energetic indie rockers Magatha Trysty will be part of a quadruple bill at Martyrs’ tonight, along with Parts Per Million, Geoff Dolce, and Kerosene Stars. Show time is 9:30 PM.

Secret Colours, a Chicago band whose self-titled 2010 CD deftly tapped into 1990s shoegazer music will be performing tomorrow night at The Empty Bottle. Chances are they’ll be playing songs from their new five-song release, EP3. Apteka is also on the bill. Secret Colours’ dark and ambitious video for “Faust,” the lead-off track from EP3, can be viewed on the band’s website.

The Demilos, whose self-produced documentary, Revolving Doors chronicled the various members who have come and gone over the years, have now broken up. However, they will be releasing a covers CD sometime this year. Filmmaker/band member Mike Snyder doesn’t rule out a reunion at some point, and given the band’s history, that seems entirely possible.

On a sad note, Sean Bonniwell, the deep-voiced lead singer of the 1960s band Music Machine has passed away due to lung cancer.

Expo 76, the eclectic covers band whose members include veterans of Chicago’s indie rock scene, have a gig at The Beat Kitchen tomorrow night. Expo 76 vocalist-guitarist Dag Juhlin, who also performs with The Slugs, Poi Dog Pondering, The Greenwoods, and 80 other bands, decided to partake in a recent Facebook trend of posting a song that was Number 1 in the charts the day you were born. Ever the kidder, he picked “Gregorian Chant - Deum verum.”

The Chicago band, Metropolly, will have a new EP out sometime in 2012. Singer-guitarist Holly Senchak made quite an impression portraying Courtney Love when Metropolly covered Hole as part of a tribute show last Halloween at The Abbey Pub. She also sang back-up during John Aselin’s Rolling Stones tribute that same night.

The Smithereens will have veteran keyboards player Andy Burton on board when they perform in Annapolis, MD, Falls Church, VA, Philadelphia, and New York City this month. Burton has logged stage time with Ian Hunter, Southside Johnny, and Robert Plant. Also, on The Smithereens front, the song “Sorry,” from Smithereens 2011, took the number 8 slot in the Little Steven's Underground Garage Coolest Song In The World 2011 Listeners Poll.

It’s always fun to check out Scotland’s music scene via The Pop Cop blog site. A January post gives a preview of the upcoming festival season over there, and some of the event names are pretty imaginative. A few examples: King Tut’s New Year’s Revolution; The Electric Frog; Beatdoon Festival; The Big Stooshie; Rockness; and Doune The Rabbit Hole.

Tickets are now on sale for Dot Dot Dot’s House Of Blues show along with AM Taxi, State and Madison, and The Scissors on February 3rd.

According to The Second Disc online newsletter, Grace Potter of Grace Potter & The Nocturnals offers her take on the classic lounge tune, “Fly Me To The Moon” on a soundtrack for the Pan Am TV show coming out January 17th. Other songs on Pan Am: Music From And Inspired By The Original Series include a new version of The Beatles’ “Do You Want To Know A Secret” by Nikki Jean; and the original versions of Bobby Darin’s “Call Me Irresponsible,” Sergio Mendes & Brazil 66’s “Mas Que Nada,” and Brenda Lee’s “Break It To Me Gently.”