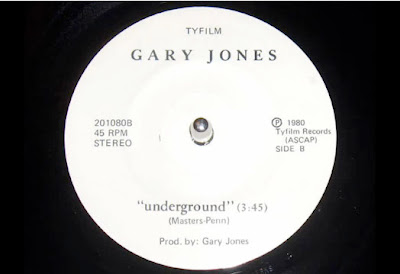 Back in 1980, “Friction” was the second single released by the Chicago band Gary Jones. Both songs were credited to the writing team of lead singer Tom Masters and guitarist Ty Penn. There was no Gary Jones in the band; it was just one of those fictional names like Jethro Tull. The band had earlier put out the original tune “Science Fiction” backed by a cover of David Bowie’s “What In The World,” and as far as I know, that was the extent of the band’s recording output. Which is unfortunate.

“Friction” is a classic new wave blend of energetic guitars and keyboards with a male-female vocal dynamic going on between Masters and vocalist Karen Pocius. They trade off and on singing lead and combine on lines like, “A brand new neighborhood.” The lyrics seem to be about finding the right apartment. “The only thing I really need is territory guaranteed,” Masters sings.

The dramatic give and take between Masters and Pocius was one of the highlights of the band’s live shows. Back when I lived on Chicago’s southwest side, I treasured the few new wave and punk bands like Gary Jones, Bohemia, and B.B. Spin that would descend from the hipper regions up north and perform at the Haywires rock club. The theatrical edge Gary Jones brought to catchy songs like “Cameo” made the band even more intriguing.

The B-side of "Friction, “Underground” features Masters alone on vocals, and he sort of drifts in after an ominous drums and keyboards intro. Although he mentions a heatwave, the song evokes more of a nocturnal ambience as it slowly grooves to a marching beat provided by drummer John Davies. I always fantasize that if I ever publish my rock and roll novel and it’s turned into a movie, this is the song that will play over the opening credits.