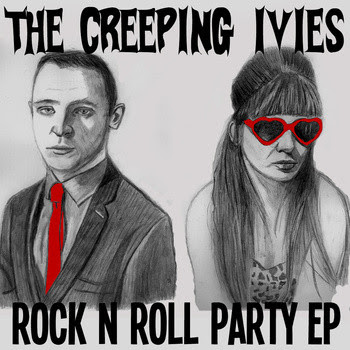 I’m not sure if The Creeping Ivies take their name from Cramps guitarist Poison Ivy but they do cite The Cramps as a major influence. Along with The Ramones, Link Wray, and Bo Diddley. The coed Scottish duo has been performing since 2010, melding a sound that feels vintage and cutting edge at the same time. Garage rock fans in the U.S. might be familiar with their wailing song, “Shake It Up,” which appeared on the 2011 various artists compilation You Got Your Punk In My Garage.

Singer-guitarist Becca Bomb’s vocals are more of a howl amidst the sparse arrangements on The Creeping Ivies’ debut EP, Rock N Roll Party. The first song, “Buggin’ Around,” opens with her fuzzed out strumming before Duncan Destruction jumps in with some hard-hitting drums. The live-performance-in-a-bar vibe continues on the seductive “Head To Tail,” with Bomb’s bravado vocals once again taking center stage. The rambunctious title track is a bit short at just under two minutes, but it’s still an irresistible invitation to join these two charismatic musicians for a good time. The Creeping Ivies would likely have to add some nuances to their bare-bones approach in order to keep an entire CD interesting, but they’re off to an intriguing start.