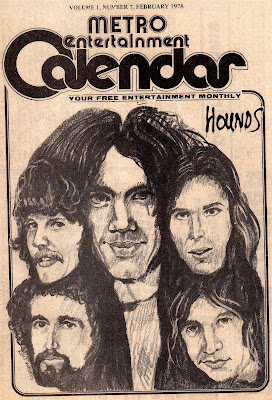 Haymakers, a Chicago area rock club that flourished a few decades ago is throwing a reunion party at Durty Nellie’s in Palatine on February 26th. I never made it to Haymakers, but I’ll be attending the reunion since I am familiar with the bands that are participating, and Durty Nellie’s is just down the street from me. I went through my yellowed copies of Metro Entertainment Calendar, the paper I used to write for back in those days, and found album reviews for three of the bands who will be at the February 26th reunion.

In the December, 1978 issue, I described the self-titled debut from Tantrum, a band fronted by vocalists Pam Bradley, Barb Erber, and Sandy Caulfield as “an impressive collection hard rock commercial melodies.” I cited the three singers' well-crafted harmonies and predicted tracks like “Kidnapped” and “Livin’ My Life Without You,” could be hit singles.

Volume One, Issue Two of Metro Calendar came out in September, 1977. Here’s what I wrote about Pezband’s self-titled first effort: “Two songs in particular, ‘Please Be Somewhere Tonight’ and ‘Baby, It’s Cold Outside,’ show a Beatles like energy and have strong chart potential.” I noted that chief songwriter/lead vocalist Mimi Betinis had successfully reproduced the British Invasion sound, and compared his angst-ridden “When I’m Down” to vintage Pete Townshend.

In April, 1978, I followed up an earlier cover story on The Hounds with a review of their debut album, Unleashed. The record included the band’s FM radio classic “Drugland Weekend,” as well as solid rock songs like “Bite The Dog” and “Alleys Of Love” The swaggering “Bad Blood Between Us” was a perfect outlet for lead vocalist John Hunter’s aggressive vocal style.