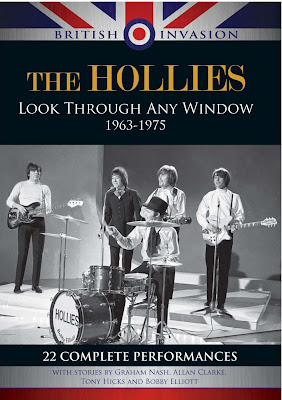 Note: This DVD review originally appeared in the Illinois Entertainer.

The Hollies appeared on countless TV shows back in their heyday but only a few of those performances have surfaced in more recent years, primarily on VH1. The recently released The Hollies: Look Through Any Window 1963 - 1975, which is being billed as the first official documentary on the band, offers 22 songs, along with running commentary from original members Graham Nash, Tony Hicks, Allan Clarke, and Bobby Elliott. This is the fifth installment in the critically acclaimed British Invasion series from Eagle Vision/Reelin’ In The Years, with re-transferred, re-mastered footage of the original performances.

All of The Hollies’ biggest hits are included, and the musicians offer some interesting background as to how they were recorded. Elton John was paid £12 to play piano on “He Aint Heavy, He’s My Brother;” “Carrie Anne” was a thinly veiled tribute to Marianne Faithful; and “Jennifer Eccles,” with that cloying wolf whistle all The Hollies came to hate, was an overtly commercial reaction to the failure of Nash’s ambitious “King Midas In Reverse” to crack the UK’s Top Ten singles chart. Clarke explains that the delicate ballad, “Wings” was inspired by Neil Young’s “Expecting To Fly.”

At the heart of The Hollies: Look Through Any Window 1963 - 1975 is a ten-minute film created by famed producer George Martin that shows the band recording “On A Carousel” at Abbey Road. It’s bird’s eye view of Nash, Clarke, and Hicks crafting the impeccable three-part harmonies that would eventually earn them a place in the Rock And Roll Hall Of Fame.