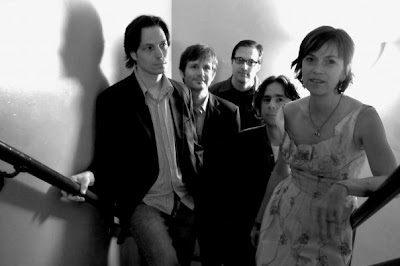 Dolly Varden will be celebrating the re-release of its Mouthful Of Lies CD with a show at Schubas Tavern on January 28th. The critically-acclaimed alt rock/country & western band will be performing all the songs from the 1995 disc, as well as a set of their favorites. Jason Narducy is also on the bill. The show starts at 9:00 PM.

The Rebuilder Concert Series continues on February 4th with performances by power pop bands The Bradburys and Too Much Saturn, along with the more punk-oriented Zero The Hero at the Rhode Centre in Kenosha, Wisconsin. Tickets for this all ages show, which also includes an art exhibit, are $10. People 21 or older with an ID can purchase alcohol. All three bands will be selling CDs and t shirts.

Brad Elvis, drummer for The Handcuffs, recently reported that he and his wife, lead vocalist-guitarist Chloe F. Orwell, are already working on the follow-up CD to the band’s 2011 gem, Waiting For The Robot.

The Bangles are offering a Super Fan Pack of their 2011 release Sweetheart Of The Sun for $59.98. It includes an autographed CD, poster, shirt, handwritten lyrics, a vinyl LP, and an album download. There’s also a Deluxe Pack for $29.98 that’s minus the handwritten lyrics and LP. Elsewhere on The Bangles front, here's a birthday wish for guitarist-vocalist Vicki Peterson, who just turned 21 the other day.

Today’s edition of the superb online newsletter The Second Disc brings writer Joe Marchese’s profile on The Move Live At The Fillmore 1969. The two-disc set, which is comprised of restored tapes that belonged to the late Carl Wayne (the band’s lead vocalist), is due out in England on February 13th, and in the U.S. on February 21st. The tracks include a cover of “Open My Eyes” by The Nazz, as well as an extended version of “I Can Hear The Grass Grow.”

I had the honor of meeting Carl Wayne in 2002 when he was touring with The Hollies in place of retired lead vocalist Allan Clarke. Wayne was a classy guy who loved meeting fans, but I wish I had been as familiar with his amazing career when we met as I am now. Hopefully, The Move Live At The Fillmore 1969 will help a lot more people appreciate Wayne and The Move.

Maple Mars singer-guitarist Rick Hromadka is one of four guest vocalists featured on the new The Collaboration Series - Movement One EP by Two Sheds Jackson. The German band takes its name from the funny Monty Python skit about composer Arthur “Two Shed” Jackson. Hromadka can be heard singing on “Beautiful Sunchild,” a melodic tune that would have fit in pretty well on the last Maple Mars CD, Galaxyland.

Laura and Linda Good have started recording as The Twigs again. The singing-songwriting fraternal twins fronted the new wave band back when they both lived in Chicago, and are in the process of mixing the first single from a forthcoming CD.