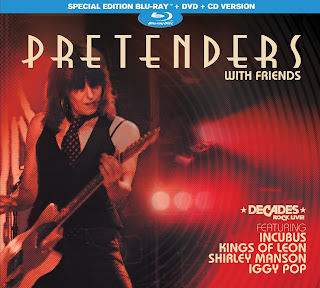 The Pretenders With Friends, a concert Chrissie Hynde and her band performed at the Decades Rock Arena in Atlantic City, NJ with special guests Iggy Pop, Shirley Manson, Kings Of Leon, and Incubus, is out today as a Blu Ray + DVD + CD set.

There are a number of festivals taking place this weekend, including Taste Of Chicago, Irish Fest, and Roscoe Village Burger Fest. See my Wednesday post for more details on each of these.

Former Hollies lead vocalist Allan Clarke released the single “Journey Of Regret” today. The song reflects Clarke’s long-held admiration for Bruce Springsteen and is the first taste of a new album titled Resurgence coming out on September 20. It will be Clarke’s eighth solo effort, but the first in almost 30 years.

Tickets went on sale today for the Marcia Ball Band at SPACE on November 8; BoDeans at City Winery Chicago on November 30 and December 1; Ralph Covert’s Acoustic Army at FitzGerald’s on July 20; Robbie Fulks at The Hideout on August 9; Delbert McClinton and Gerald Dowd at Old Town School Of Folk Music on September 21; Lucy Wainwright Roche at SPACE on September 11; and Sarah Shook and The Disarmers, with Senora May at Sleeping Village on October 11. For a full list of upcoming concerts in the Chicago area, check the Early Warnings page of this week’s Chicago Reader.

The next season of Jerry Seinfeld’s Comedians In Cars Getting Coffee starts July 19 on Netflix.

The Long Grove Arts and Music Council will stage the first of the four free concerts it has lined for this summer when Corky Siegel and Will Tilson perform this Sunday afternoon on Towner Green.

Pete Townshend was among the famous musicians on social media mourning the passing of Alan Rogan, a highly respected guitar roadie. Rogan had worked with The Who, The Rolling Stones, Graham Nash, and Joe Walsh. Rock In Paradise, Mr. Rogan.

Neo, the iconic new wave club that reigned on Clark Street for so many years, is having a reunion at Metro on Saturday, July 20.

Congratulations to Johnny Marr on selling out all the dates on his current UK tour.

With a lineup of former Friggs, Muffs, and Pandoras members Kim Shattuck, Melanie Varmmen, and Palmyra Delran, it’s a safe bet the new trio The Coolies will be a blast. Their debut effort, the six-song EP Uh Oh! It’s . . . The Coolies will be available in digital format next Friday and the 10-inch clear emerald vinyl version is available for preorder on the band’s Bandcamp page.

Can I have one? While making my weekly trip to the Reckless Records downtown location, I noticed the store’s record bins are decorated with colorful Official Lollapalooza After Show mini-posters, including ones for Sharon Van Etton and Jade Bird at Schubas and Lincoln Hall.

Green City Market’s annual Chef BBQ will take place at the south end of Lincoln Park (approximately 1817 N. Clark) on July 18 from 5:30 to 8:00 p.m. Over 100 Chicago area restaurants and breweries will be involved, including Antique Taco, Bad Hunter, Commons Club at Virgin Hotels Chicago, Eataly, Floriole, Goose Island Brewhouse, Maddon’s Post; Revolution Brewing, Spiaggia, The Gage, and Upstairs at The Gwen. There’s a wide range of ticket prices, which can be found at the Green City Market website.

The Bob Dylan: Electric exhibit has been extended at the American Writers Museum in downtown Chicago.

The Black Harvest Film Festival continues its 2019 run at the Gene Siskel Film Center through July 22.

Kokandy Productions’s production of Head Over Heels, the Broadway musical based on songs by The Go-Go’s, continues through August 25 at Theatre Wit on Belmont Avenue.
Posted by Terry Flamm at 10:34 PM