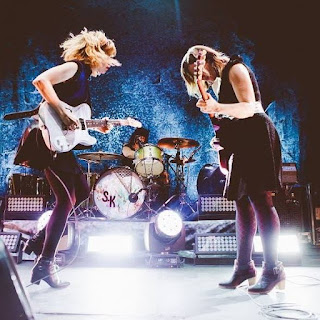 Tickets are now on sale for Sleater-Kinney at the Riviera Theatre on October 18. The critically acclaimed and sharp-edged trio’s new album The Center Won’t Hold will be available in various formats on August 16.

Other upcoming shows include the Vinyl Village Record Fair at Sleeping Village on June 30; Scott Ligon’s All-Star Freakout! Presents the Music of Rami Gabriel at FitzGerald’s on July 12; Temples at Metro on October 31; Corky Siegel and Tracy Nelson at SPACE on October 12; John Hiatt at City Winery Chicago on October 30 through November 1; Ike Reilly at FitzGerald’s on August 30; and Chely Wright and Alice Peacock at City Winery Chicago on September 11.

Deep Chicago ‘60s, the second effort by Chicago Friends and Guests, a collection of local musicians, is now available on on iTunes and Apple Music. Phil Angotti, Packy Lundholm , Mark Rogers, Gary Baker, and Britt Savage takes turns in the spotlight on a selection of Chicago band recordings originally released in the 1960s. Back in 2017, Chicago Friends and Guests recorded 9 X12, which found them expertly covering The Who, The Beatles, Them (or Shadows Of Knight), The Hollies, The Animals, The Byrds, and The Searchers.

Sounds great. The Imperial Sound and Diplomats of Solid Sound, besides both being Chicago bands with the word ‘Sound’ in their names, have also both released impressive debuts recently. They’ll share the same bill at SPACE in Evanston on June 26. On July 19, The Imperial Sound have a gig at the Hey Nonny venue in Arlington Heights.
Posted by Terry Flamm at 9:30 PM