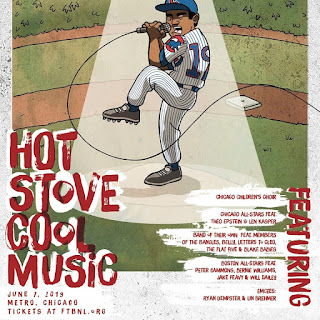 The Chicago half of the charity event Hot Stove Cool Music will be held this Friday night, June 7 at Metro. (The Boston version took place earlier this year.) Presented by Google, True Value, KPMG, and Chicago Trading Company, the annual baseball/rock and roll mashup helps Chicago Cubs President of Operations Theo Epstein, along with his brother Paul and award-winning sportswriter Peter Gammons raise funds for the Foundation To Be Named Later. The Foundation is dedicated to “improving lives through education, leadership and the healthy development of youth and families.”

Theo Epstein and Chicago Cubs broadcaster Len Kasper will be rocking with the Chicago All-Stars, while Peter Gammons, Bernie Williams, Jake Peavy and Will Dailey front the Boston All-Stars. Chicago-based hip hop artist (and younger brother of Chance The Rapper) Taylor Bennett was recently announced as one of the performers. WXRT morning personality/long-time Cubs fan Lin Brehmer and former Cubs pitcher Ryan Dempster return as emcees, and attendees will also hear from the Chicago Children’s Choir. Another definite highlight will be a performance by Band Of Their Own, an all-star group with a rotating roster of women musicians.

This year’s BOTO includes members of The Bangles, Belly, Letters To Cleo, The Flat Five, and Blake Babies. Bangles vocalist-drummer Debbi Peterson co-wrote one of the band’ best songs, “Some Dreams Come True” (with W. Inglehart), and Blake Babies vocalist-drummer Freda Love Smith currently performs with one of Chicago’s best current bands, Sunshine Boys. WXRT continues to tease fans on social media about a special, as yet-to-be-named guest. Metro is located just down the street from Wrigley Field, the doors open at 7:30 p.m.
Posted by Terry Flamm at 9:40 PM