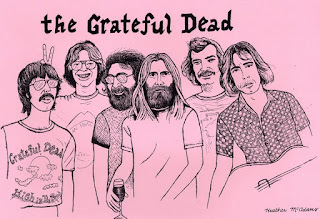 Comic artist Heather McAdams is once again hosting a bash with various local musicians covering the famous rock and roll acts that will be featured via her drawings in an upcoming calendar. She and Chris Ligon will be at FitzGerald’s in Berwyn tomorrow night, along with The Flat Five (The Association); Jodee Lewis (Bill Monroe); Phil Angotti (The Dave Clark Five); Robbie Fulks (George Jones); Joshlyn Lomax (Sarah Vaughan); The Jim Becker Group (The Grateful Dead); Dave Drazin (Jess Stacy) Matt Miller (Richie Havens); and others. There will also be a merchandise table with CDs, postcards and calendfars. Doors open at 7:00 p.m., admission is $20.00.

The Rolling Stones have added another Chicago date to their 2019 No Filter U.S. tour. In addition to June 21, they’ll also be at Soldier Field on June 25. Maybe that gives them five days to spend in town. I just hope they know that Broken Hearted Toy is the best way for famous British musicians to find out what’s happening on the Chicago club scene. Tickets for both concerts went on sale this morning.

The Dyes; Baby Money and Down Payments; and Willow Canyon will take turns rocking the stage at Montrose Saloon tomorrow night. August Forte will be spinning rock, punk. garage, and surf records. The show starts at 9:00 p.m.

The Waco Brothers will be at the new Hey Nonny club in Arlington Heights tomorrow night.

If you’re an avid follower of the Chicago rock scene, you’ve probably heard the concerns being raised about how the proposed $6 billion Lincoln Yards project might affect clubs like The Hideout that are located in that area. Long-time rock critic Greg Kot recently raised the issue in the Chicago Tribune, and other venues, like Beat Kitchen and Subterranean have joined forces with The Hideout as The Chicago Independent Venues League. Representatives from Lincoln Yards developer Sterling Bay met with music venue owners and people from the community to discuss the project at a meeting last night hosted by Alderman Brian Hopkins. Chicago Sun-Times reporter Rachel Hinton has a story about that meeting in today’s issue.

Jeff Tweedy the frontman for Wilco, now has a new a solo album—titled WARM—to go with his new memoir Let’s Go (So We Can Get Back). The album was released today.

Chicago alt rock band whitewolfsonicprincess is planning to have its third album, The Alternate Boot, out in time for the holiday shopping season. Their last two efforts were favorably reviewed here on Broken Hearted Toy. The band will be hosting its annual Rock For Tots event on December 8 at The Store on Chicago’s north side. They’ll be joined be Dark Room Men; The Rut (a musical offshoot of the Famous In The Future comedy group); Lady Stardust; Parallelicopter; Ex Maquina; @Portman-towzone; and comedian Trevor Gertonson.

The David Bowie tribute act Sons Of The Silent Age will be joined by special guest, acclaimed actor Michael Shannon when it performs Bowie’s Scary Monsters (and Supercreeps) at Metro on January 12. A portion of the proceeds will benefit cancer patients at NorthShore University HealthSystems’s Integrative Medicine Program.

The 3 X 4 double LP I picked up at the downtown Reckless Records on Black Friday Record Store Day sounds like it’s going to be one of my favorite albums of 2018.  It features original Paisley Underground members The Bangles, Dream Syndicate, The Rain Parade, and The Three O’Clock covering each other’s songs. Hopefully, I’ll be posting a review in the near future.
Posted by Terry Flamm at 10:14 PM