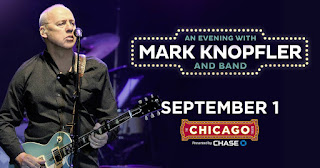 Mark Knopfler has a new album titled Down The Road Forever coming out November 9, and The Kooks recently released Let’s Go Sunshine, which finds them moving back to more familiar territory than their more techno-oriented 2015 effort Listen.

Other albums due out this month include Negative Capability by Marianne Faithful today; Shiny And Oh So Bright. . . by Smashing Pumpkins on November 16; The Bela Session by Bauhaus on November 23; and Bitter-Sweet by Brian Ferry and WARM by Jeff Tweedy on November 30.

The SOFA Expo, which bills itself as “The World’s Foremost Fair of Contemporary Decorative Arts and Design,” opened on Navy Pier yesterday and will run through Sunday.

Little Steven and The Disciples Of Soul will be performing at Copernicus Center this Monday, November 5. The concert is part of WXRT 2018 Holiday Concert series.

Singer-guitarist Michael Steven Cohen, who founded the local power pop bands The Abbeys and The Pop Dollys, will host a Saturday Morning Open Stage at KaffeStube in Schaumburg tomorrow morning.

Chicago-based filmmaker Lance Eliot Adams is about to start work on his first feature-length film. Adams, a familiar face to regular attendees of the Mary-Arrchie Theater’s annual Abbie Fest, has made 40 short films over the past 10 years.

The Safes are holding their 15th Annual Black Wednesday Show at Schubas so be sure to have all your Thanksgiving meal preparation done early. This year, they’ll be joined by The Differents, Baby Money, The Down Payments, and The Marcatos. The party will also celebrate the release of a very cool Juliana Hatfield tribute seven-inch single by The Safes on the American Laundromat label. “Universal Heart-Beat” and “I See You” were recorded with help from Material Issue’s Ted Ansani and Mike Zelenko and produced by Steve Albini.

The American Laundromat site is also where you can pre-order a new album titled Weird from Juliana Hatfield herself. It’s due out January 18 and is available in various formats—including colored vinyl.

The Stern Pinball company plans to market a new pinball machine based on the early days of Beatlemania. According to an article by Ryan Smith in the Chicago Sun-Times, there will be 1,964 machines in the line, including a 100-run Diamond Edition that could rake in mega dollars from ultimate pinball machine fanatics.

The Sunshine Boys will celebrate the vinyl release of their superb album Blue Music with a show on November 24 at Montrose Saloon. When I reviewed the CD/download version here last May, I noted the material ranged from romantic entanglements to urgent calls for political action, with well-crafted lyrics set to arrangements that combine alt rock with guitar-driven 1960s pop. Five months later, I would still say “Only A Million Miles” ranks as the best rock song any artist has recorded in 2018.

Peter Asher and Jeremy Clyde—that’s one half of Peter and Gordon and one half of Chad and Jeremy—have a gig coming up next Tuesday, November 6 at City Winery Chicago.

Film director (and one-time Cleaning Ladys band member) John Anderson will be at the Gene Siskel Film Center November 9, 10, and 11 for screenings of his new documentary Horn From The Heart: The Paul Butterfield Story. There will be a discussion with the audience on each of those occasions, as well as special guests to be announced later. Horn From The Heart will run at The Gene Siskel Center through November 15.

Private Peaceful, the play based on Michael Morpurgo’s 2003 critically acclaimed novel, runs through November 11 at the Greenhouse Theater on Lincoln Avenue. Lead actor Shane O’Regan was an Irish Times Best Actor nominee when Private Peaceful was staged in Ireland.
Posted by Terry Flamm at 10:02 PM