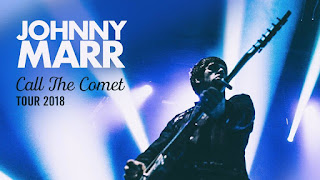 For someone who’s performed so well within groups (The Smiths, Modest Mouse, The Cribs, etc.), Johnny Marr might be even more impressive when he records as a solo artist. On his first two efforts, The Messenger (2013) and Playland (2014), Marr combined his signature guitar strumming with irresistible synth arrangements. It took him four years to record another, but on the recently released Call The Comet, Marr once again breathes new life into a distinctively 1980s format.

On Call The Comet, he sets imaginative and often cryptic lyrics to atmospheric rock to evoke sci-fi film noir. “It’s the dawn of the dogs,” Marr warns on the opening track “Rise,” and adds “They hound they howl/They never let up.” An ominous message likewise lurks within the percolating synth rhythms of “New Dominions,” while the funky “Bug” depicts a widespread virus that leaves the population “sick and shaking.”

“Hi Hello,” which sounds a bit like Patti Smith’s “Dancing Barefoot,” offers a consoling message to someone who feels overcome and lost. The shimmering “Spiral Cities” describes an urban landscape that includes vertical streets, and “Tracers” urges us to “Make your way to the edge of the world.” “My Eternal” deals with confusion and possibly, a disdain for religious beliefs, but it moves with such exhilarating high speed, it’s impossible not to enjoy the ride.
Posted by Terry Flamm at 8:51 PM