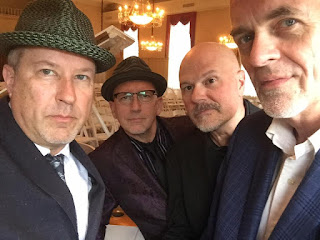 EXPO ’76 returns to Mac’s On Slade in Palatine for an 8:45 p.m. gig this Friday night. The band members are music scene veterans, and their experience is evident in the decades-spanning and impeccable cover versions they perform. Unique treats, like a “James Bond Theme”/”Sunny” by Bobby Hebb mashup, and song segues not many bands would have the knowledge to craft, are part of every show. Note: Mac’s is a small venue so get there early if you want a place to sit. Also, it will cost $3 to see this gig (I think Mac’s generally doesn’t have a cover charge) but as the band humbly noted on social media, it’s worth at least twice that much.

Singer-guitarist Dag Juhlin, who’s one of those EXPO ’76 band members, has a show titled Solo Recital #2 coming up on November 30 at the Friendly Tap in Berwyn. I have no idea what songs he’ll be playing, but it would be fun to hear a mix of material from The Slugs, Poi Dog Pondering, Sunshine Boys and other bands he’s performed with over the years. Dave Sebastian, a member of The Raine—the band that backed Off Broadway vocalist Cliff Johnson on a number of occasions—will be the opening act.

Tributosaurus, one of Chicago’s most successful tribute acts, will be performing a One Hit Wonders of the 1980s show when it return to the Copernicus Center in Chicago’s Jefferson Park neighborhood on January 20.

The Sting Police, a tribute act that specializes in the music by The Police and Sting, have a 7:30 p.m. show coming up this Friday at the Metropolis Performing Arts Centre For The in Arlington Heights.

Big Brother’s Vinyl will be playing guitar-driven, classic rock hits and deep album cuts at the Countryside Saloon in Des Plaines this Friday night, and at the Arlington Ale House in Arlington Heights on December 8.
Posted by Terry Flamm at 9:20 PM