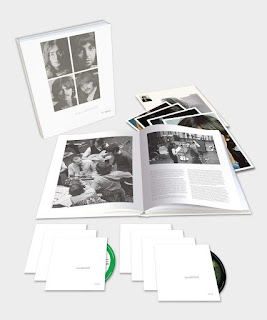 Black Friday arrives in exactly two weeks, but for people looking to find gifts for the rock and roll fans on their lists, today is White Album Friday. The Beatles’ 1968 two-record set, a ground breaking and band breaking up affair, becomes available today in a variety of versions. The $138.74 option on Amazon comprises six CDs, including one with 27 tracks from the now legendary Esher demo tapes that were recorded at George Harrison’s home back in the day. The $22.97 three-CD set also has that disc.

The new documentary Horn From The Heart: The Paul Butterfield Story will be screened tonight at the Gene Siskel Film Center and run through November 15. Director John Anderson, along with special guests, will be on hand tonight, tomorrow, and Sunday for a discussion with the audience. Jeff Johnson in the Chicago Sun-Times and Greg Kot in the Chicago Tribune each gave Horn From The Heart a three-star rating in their reviews today.

Tickets went on sale today for Dave Davies at SPACE on April 20 and at City Winery Chicago on April 21; Herb Alpert and Lani Hall at City Winery Chicago on May 4 and 5; Fleetwood Mac at the United Center on are March 1; and Nick Mason’s Saucerful Of Secrets at the Chicago Theatre on on April 4. You can always find an extensive list of concerts that have just gone on sale on the second to last page of Chicago free paper The Reader.

This week’s Reader has a particularly good edition of The Secret History Of Chicago Music by artist/musician Plastic Crime Wave. The comic is a regular feature in the paper, and the latest installment focuses on the band The Service and the Pravda indie label they founded. It’s a detailed look at how these musicians have kept active in the local music scene, with three of them—Rick Mosher, Kenn Goodman, and Gary Schepers—currently performing with The Imperial Sound.

As noted in The Mix column of today’s Chicago Sun-Times, the 30th Annual Polish Film Festival is currently running at Facets Cinematheque; AMC Rosemont; and The Gallery Theatre. The Mix also noted that the Green Line Performing Arts Centre, which plans to collaborate with south side theatre groups, is inviting the public to check out its space at 329 E. Garfield tomorrow from 2 :00 p.m. to 6:00 p.m.

David Crosby has a gig coming up on November 19 at the North Shore Center For The Performing Arts in Skokie. The Richard Thompson Electric Trio will be at Thalia Hall on December 7 and 8.

The Zombies have a special concert coming up to honor the late Jim Rodford, who played bass guitar for them, Argent, and The Kinks. The event will be held on January 20 at The Alban Arena in St. Albans in the U.K.

Long-time Lincoln Park store The Book Cellar will host An Evening With Jeff Tweedy at The Music Box on Southport next Sunday, November 18 at 7:00 p.m. Tweedy, well-known frontman for Wilco, will be discussing his new memoir Let’s Go (So We Can Get Back).

There will be plenty of merriment when EXPO ’76 returns to my sleepy hometown of Palatine next Friday night for a gig at Mac’s On Slade. Trees are being decorated all over town, although that might have more to do with the holiday season than the band’s imaginative and always fun selection of cover versions. The music starts at 8:45 but since Mac’s is a small joint, you’ll have to get there much earlier if you want a place to sit.

Long-time Chicago guitar slinger Lorrie Kountz will bring her band to Mac’s on November 28 for a 7:30 p.m. show.

The Safes are holding their 15th Annual Black Wednesday Show at Schubas so be sure to have all your Thanksgiving meal preparation done early. This year, they’ll be joined by The Differents, Baby Money, The Down Payments, and The Marcatos.

The Sunshine Boys will celebrate the vinyl release of their superb album Blue Music with a show on November 24 at Montrose Saloon.

Private Peaceful, the play based on Michael Morpurgo’s 2003 critically acclaimed children’s novel, wraps up its run at the Greenhouse Theater on Lincoln Avenue tomorrow night.
Posted by Terry Flamm at 10:02 PM