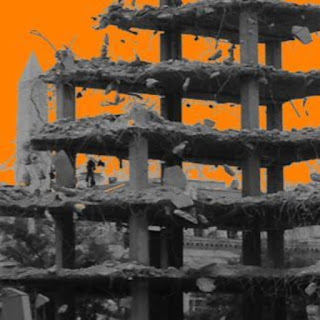 Proto Retro finds Dot Dash experimenting with Beach Boys style backup vocals and jangling guitars. It’s a new but not surprising approach from a band that has pretty much employed a different game plan for each of the six full-length albums it’s released since 2011. Based in Washington, D.C., Dot Dash has previously given us authentic punk, as well as guitar-driven alt rock inspired by 1980s masters like Translator and Red Rockers. The impressive journey continues with the recently released Proto Retro.

Dot Dash brings a sharper edge and cryptic lyrics to their jangling, catchy arrangements, particularly on “Unfair Weather” and “Sun + Moon = Disguise.” Much of the album evokes the way R.E.M. updated The Byrds, with “It’s The End Of The World As We Know It” often serving as a template. Vocalist-guitarist Terry Banks adroitly navigates quick rhymes and off-kilter phrases like “I made a hat of a Texas map” on the defiant “Green On Red” and “I’ve gone back in time, please remain on the line” on “World’s Last Payphone.”

“Dead Letter Rays” and “Parachute Powerline” are melodic tracks in a more traditional power pop vein, while the slower and romantic “Triple Rainbow” has a psychedelic feel. At times, it’s even fun to hear Banks contradict himself within the same song. “Tamed A Wild Beast” offers uplifting sentiments like “If you moved a mountain” and “If you rose above,” only to snap back with, “Keep it to yourself.”
Posted by Terry Flamm at 9:47 PM