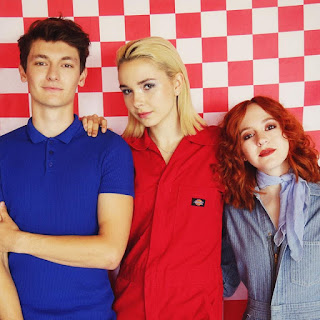 One of the reasons The Regrettes’ 2017 debut Feel Your Feelings Fool! drew critical raves was way the Los Angeles-based punk band brought social commentary to its energetic songs. Lead vocalist-guitarist Lydia Night’s satirical lyrics took deadly aim at the limitations society places on women, using catchy arrangements that often evoked the 1960s girl group sound. “You’re talking to me like I’m hurt,” she sang on “Seashore” but quickly added, “And I’ll still kick your ass even in my skirt.”
So it’s no surprise The Regrettes’new single “Poor Boy” mocks the “men are under attack” backlash against the #MeTooMovement with a driving beat and a simple animated video that depicts a man with streams of tears gushing from his eyes. “We’re releasing this song because we are done with letting abusers walk free,” the band explains on its Facebook page. Viewers of the clip are being asked to make a donation to RAINN, a foundation that helps sexual assault and rape victims.
Posted by Terry Flamm at 9:29 PM