The Bookends - Far Away But Around 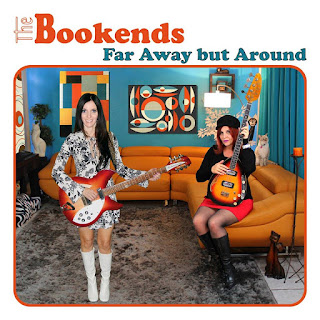 Bassist Sharon Lee and guitarist Karen Lynn leave no doubt as to which decade serves as the main inspiration for the 12 catchy songs on their new Far Away But Around album. Performing under the name The Bookends, they’re able to recreate various shades of 1960s rock through authentic instrumentation and their dual vocals approach. For the most part, they deal in girl-meets-boy, boy-is-impossible-to-figure-out relationships.

On “What I Wouldn’t Do” and “Mean What You Say,” guitar-driven garage rock arrangements underscore the message that some guy is about to get kicked to the curb. “Let It Go,” which features instrumentation inspired by the earliest days of The Who, also deals with a two-faced boyfriend. The songs are fun but might have worked even better with a rougher edge to the vocals.

“It Takes Two” sounds like how The Go-Go’s and The Bangles have interpreted the 1960s, as a woman passes a word of caution on to her ex-boyfriend’s new flame. “The Rooftop” is a romantic celebration that evokes a packed dance floor at a sock hop. A good boyfriend also surfaces on the peppy “Morning Sky,” which proves The Bookends are also adept at more current sounding indie rock.
Posted by Terry Flamm at 8:27 PM