The Top Boost - Turn Around 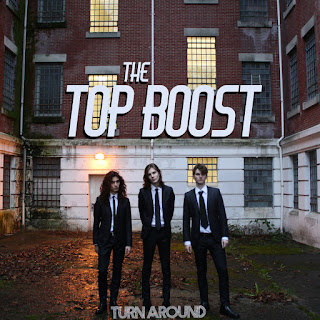 The Top Boost released their five-track debut Turn Around in 2016, but I had never heard of them until International Pop Overthrow CFO/Founder David Bash posted a Facebook shoutout after they performed at one of his festivals earlier this year. A quick visit to their Bandcamp page proves Bash’s admiration is justified. Self-described as “Vancouver’s premier (and only) psychedelic power pop trio,” The Top Boost is drummer Hunter Gogo, guitarist Krill Yurtsev, bassist Parker Elkins, and at some point, bassist Greg Johnstone. All of them sing.

Turn Around, which was recorded in Vancouver and mixed at Abbey Road Studios in London, opens with the brief and silly “Sunscreen Livin.’” From there, chief songwriter Hunter crafts breathtaking melodies while celebrating the mystical, if all too often brief, power of romance. “She has every piece of you written on her mind” is one of the more intriguing images from “What If She Loves You,” a high-energy gem fueled by Yurtsev’s jangling guitar playing.

The wistful “Tell That Girl” is a gorgeous ballad that promises, “I’ll be thinking of you when I’m gone,” and the title track features a spacey atmosphere built with swirling keyboards. “Still On My Mind” mixes 1960s era psychedelic and garage rock at a brisk pace, and gives the EP a massive finish.
Posted by Terry Flamm at 9:29 PM