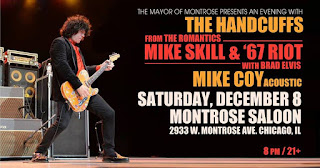 The Handcuffs, Mike Skill and ’67 Riot, and Mike Coy will join forces for an impressive triple bill tomorrow night at Montrose Saloon. Skill is a longtime member of The Romantics, and Brad Elvis plays drums with The Handcuffs and The Romantics. Coy will being doing an acoustic set. The music starts at 9:00 p.m.

Alt rock band whitewolfsonicprincess has its third album coming out soon, and will be hosting its annual Rock For Tots event tomorrow night at The Store on Chicago’s north side. They’ll be joined be Telepaths; The Dark Room Men; The Rut (a musical offshoot of the Famous In The Future comedy group); the five-woman David Bowie tribute band Lady Stardust; acoustic duo Parallelicopter; Ex Maquina; the power trio Portmantowzone; and comedian Trevor Gertonson. The show kicks off at 7:30 p.m.; The Store is located at 2002 N. Halsted.

Cheap Kiss Records is having a warehouse sale featuring lots of cool vinyl tomorrow from 9:00 a.m to 1:00 p.m at 604 Albion Avenue in Schaumburg, IL. The store’s Facebook post shows albums by U2, R.E.M., Elvis Costello, Cheap Trick, and The Cars.

Congratulations to The Art Institute Of Chicago on its 125th Anniversary. The museum will celebrate  will special events tomorrow.

Several musicians around the world have posted tributes to Pete Shelley of The Buzzcocks, who passed away recently from what is believed to be a heart attack. Fans have also been posting links to YouTube videos of their favorite Buzzcocks songs on Facebook. The band was known for combining the power of punk with irresistible melodies.

The Irish Heritage Center on Chicago’s northwest side will present Paddy Homan and The Noble Call Irish Christmas show this Sunday at 5:00 p.m. Vocalist/recording artist Homan is adept at festive as well as heartfelt songs, and The Noble Call is a quartet that features traditional Celtic instruments. Both acts will also have dancers on stage.

Tickets went on sale today for Neko Case at The Vic Theatre on on April 26 and 27; and Jenny Lewis at the Riviera Theatre on March 30. Lewis has a new album coming out around that time.

Other shows now on sale include Queen and Adam Lambert at the United Center on August 9; Elton John at the Allstate Arena on February 15; Wanda Jackson at SPACE on March 14; Marshall Crenshaw and The Bottle Rockets (two shows) at Old Town School Of Folk Music on April 6; Terry Reid at SPACE on April 25; Snow Patrol at the Riviera Theatre on May 7; and Old 97’s at Thalia Hall on March 28.

Tom Lanham’s cover story on The Old 97’s in the December issue of the Illinois Entertainer mentions that lead vocalist Rhett Butler has what Lanham describes as an “Edward Gorey-grim” book of children’s poetry called No More Poems! coming out in March. “I even scored the biggest illustrator in the business,” Miller states, “this guy who’s a Caldecott winner winner.” We sometimes have guest authors at the monthly writers group I belong to, so maybe our people could call his people.

By the way, “Rudolph Was Blue” from The Old 97’s Love The Holidays album is one of the most fun rock holiday songs to be released this year.

Van Morrison has shows coming up at the Chicago Theatre on April 24 and 25. His new album The Prophet Speaks just came out today.

The first U.S. tour by The Chills since 1996 will include a stop at The Empty Bottle in Chicago on February 27. Other dates include Brooklyn, Washington, D.C., Minneapolis, and Los Angeles. The New Zealand band found worldwide success with “Heavenly Pop Hit” back in the 1980s, but with Martin Phillipps at the helm, continues to record engaging albums like the recently released Snow Bound and their politically charged 2016 effort Silver Bullets.

M-U-S-T-S-E-E. Women Of Soul: With A Tribute To Aretha Franklin is currently running at the Black Ensemble Theatre on Chicago’s north side. BET his well know for its authentic tribute shows to soul and rhythm and blues artists. Women Of Soul runs through January 13.

Just over a year ago, when my wife Pam and I were visiting Manhattan, I bought a Bruce Springsteen On Broadway shot glass at the Hard Rock Café store. I asked the clerk if Bruce himself had ever browsed the souvenirs from his show, and she joked, “If he did, people would have heard me scream for miles around.” She’ll likely be among the multitude of fans buying the Springsteen on Broadway soundtrack when it’s released next Friday. The show Springsteen On Broadway ends its run on December 15.

The 20th Annual Animation Show Of Shows comes to the Gene Siskel Film for a two-week run starting on December 14.

Congratulations to my nephew Joe Flamm, winner of the Season 15 Top Chef competition on the Bravo Channel, and his wife Hillary Delich on the birth of their son Luka.
Posted by Terry Flamm at 10:13 PM