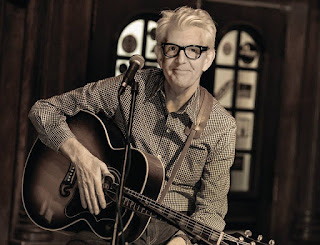 If it’s become obvious that none of your friends are having a New Year’s Eve party, or worse yet, there is a party and you weren’t invited, here are a few suggestions on how to still have fun tomorrow night.

Nick Lowe is in the midst of a short series of gigs at SPACE in Evanston, and for his New Year’s Eve bash, he’ll be joined by the instrumental group Los Straitjackets. The pairing makes perfect sense since Los Straitjackets recorded an album’s worth of Lowe’s material titled What’s So Funny About Peace, Love And Los Straitjackets on the indie label Yep Roc Records. Lowe himself has a lengthy resume to draw from, including “Cruel To Be Kind,” “Raging Eyes,” “So It Goes,” “Cracking Up,” “Play That Fast Thing (One More Time),” and of course, “What’s So Funny About Peace, Love And Understanding?”

Material Reissue, which features original Material Issue band members bassist-vocalist Ted Ansani and drummer Mike Zelenko, along with singer-guitarist Phil Angotti, will ring in the new year with awesome original power pop tunes like “Valerie Loves Me,” “Renee Remains The Same,” and their chilling cover of The Green Pajamas’ “Kim The Waitress” at the Liar’s Club on Fullerton in Chicago. John San Juan, a member of the Chicago psychedelic band The Hushdrops as well as a solo recording artist, will be helping out on guitar. The doors open at 8:00 p.m., and according to a Facebook post, the rocking starts at 11:00 p.m.

Tomorrow is the last day Chicagoans can check out the Saturday Night Live: The Experience exhibit is at the Chicago Museum of Broadcast Communications on State Street. Just seeing some of the costumes and props that were used in iconic skits and songs over the TV show’s extensive history elicits smiles and often, bursts of laughter.

It would easier to predict what the coming year will bring than guess what cover versions EXPO ’76 will perform at FitzGerald’s in Berwyn on New Year’s Eve. These veterans of the Chicago club scene have decades of material in their repertoire and the way they combine unlikely tunes together adds to the fun. The Outcast Jazz Band will also be on hand.

The Neverly Brothers will bring their rock and roll history tour to the Pheasant Run Mainstage Theatre in St. Charles tomorrow night but they won’t be there to ring in the new year. Their set ends at 9:30.

The new Hey Nonny club in downtown Arlington Heights (a short walk from the Metra station) is holding a New Year’s Eve Blues Bash with Lil’ Ed And The Blues Imperials. The show starts at 8:00 p.m.

Those who have fully recovered from their New Year’s Eve revelry by Thursday can check out the Montrose Saloon Tribute Social Night #2 - Elvis Costello Edition. Phil Angotti, Brad Elvis, Chloe F. Orwell, Rachel Drew, and Casey McDonough are among the participating acts, and all of them are veterans of tribute shows around Chicago.
Posted by Terry Flamm at 9:52 PM