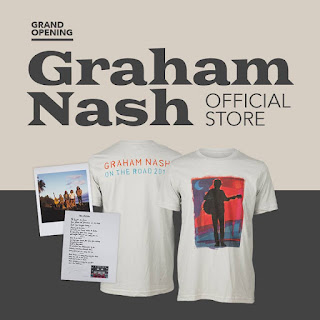 Happy Birthday to my lovely wife Pam. She set up this blog for me a little over nine years ago, and without that help, Broken Hearted Toy would never have been possible.

That’s what girls (and boys) want. Material Reissue, which features original Material Issue band members bassist-vocalist Ted Ansani and drummer Mike Zelenko, along with singer-guitarist Phil Angotti, will ring in the new year with awesome power pop at the Liar’s Club on Fullerton in Chicago on December 31. The doors open at 8:00 p.m.

The online Graham Nash Official Store recently had its grand opening, and there are plenty of items, including t-shirts, autographed CDs, and manuscripts, that would thrill all the Nash fans on your holiday gift list. I still remember getting my first Hollies album as Christmas gift in 1966. Personally, I’d love to see Nash bring a pop-up store to Chicago.

Someday soon, you might see me wearing Handcuffs. Apparel. The Handcuffs, the Chicago-based indie band that recorded three solid albums and has landed songs on national TV shows, is now selling t-shirts. Check The Handcuffs’ Facebook page for details. Mine came in the mail today.

The Women Of Soul: With A Tribute To Aretha Franklin runs through January 13 at the Black Ensemble Theatre on Chicago’s north side. BET is well know for its authentic tribute shows to soul and rhythm and blues artists.

Nick Lowe will perform at SPACE in Evanston on December 29 and 30, and for his New Year’s Eve bash at that same venue, he’ll be joined by Los Straitjackets.

San Francisco-based singer/multi-instrumentalist Richard Turgeon shows impeccable taste in the songs he’s chosen for his new 9 Covers album, which is available for a limited time as a free download on his website. The interpretations of The Beatles, Tom Petty, Nirvana, and Gin Blossoms are particularly impressive. Turgeon has recorded two albums of original material, which are available for sale on his site.

The Chicago-based indie band Mooner has teamed up with producer Kit Shields for a cover version of the Tears For Fears hit “Everybody Wants To Rule The World.” It’s an instrumental take that sounds like it was part of the Charlie Brown Christmas Special, and can be downloaded for free on the band’s website. The song is a preview of Mooner’s EML 101 Vol. 2, a full album of cover versions due out in January.

The Sons Of The Silent Age David Bowie tribute band has a gig coming up January 12 at Metro that will help the NorthShore University HealthSystem Foundation in its fight against cancer. Michael Shannon, the nationally acclaimed actor with strong ties to the Chicago theatre scene, will perform a few Lou Reed songs at the Metro show.

Chicago Tribune writer Heidi Stevens usually doesn’t review local theatre productions in her balancing act column, but her recent take on the Goodman Theatre’s annual production of A Christmas Carol made an interesting point. Stevens focused on the compassion and determination Ebenezer Scrooge’s nephew Fred (changed to niece Frida in the Goodman show) employed in the hope of transforming the old miser into a caring human being again.

Best wishes to everyone for a joyous and caring holiday season.
Posted by Terry Flamm at 11:03 PM