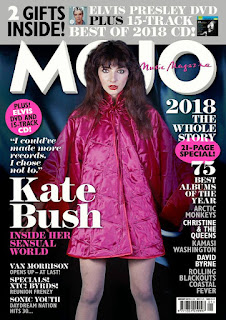 Best wishes to all for a happy and safe New Year’s Eve!

“Auld Lang Syne” will resonate more deeply this year for the staff and regulars of The Heartland Cafe. A popular food and live entertainment venue on Chicago’s far north side since 1976, it closed for good today at 5:00 p.m. It was an inviting place for local acts to develop a following, and it also played host to International Pop Overthrow - Chicago for several years. IPO founder David Bash paid tribute to Heartland Cafe in a recent Facebook post. The Chicago incarnation of his traveling power pop festival will move to the LiveWire venue on Milwaukee Avenue.

Having posted a review praising the 2016 debut EP Turn Around from The Top Boost recently, I was glad to hear the Vancouver, BC power pop/psychedelic trio is now “putting the finishing touches” on a new effort. I’m looking forward to hearing it.

My wife Pam and I saw Bohemian Rhapsody over the holidays, and despite the fact that the film tosses the Freddie Mercury/Queen timeline in a blender and serves it up as a frothy concoction, we enjoyed it for the most part. Seeing the songs come to life and watching the band members argue over whose stuff would get recorded (there was a running joke about “I’m In Love With My Car”) was fun, and the live performances were impressive.

One of the previews we saw before the Queen movie started was for the Elton John Rocketman biopic coming out this summer. Perhaps due to the uproar over the factual errors in Bohemian Rhapsody, the Elton John flick is being billed as “Based On A True Fantasy.” I hope it has a scene showing Elton playing piano in the studio with The Hollies while they record “He Ain’t Heavy He’s My Brother,” but I don’t think that’s likely.
Posted by Terry Flamm at 7:46 PM