Before And After They Turned To Stone 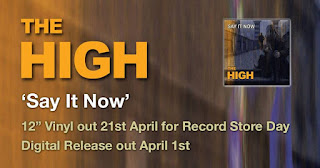 Fans of The Stone Roses are justifiably disappointed that the Manchester-based band has released so few albums since its groundbreaking self-titled debut in 1989. Earlier this year, two Stone Roses-related singles appeared via Record Store Day in the UK. The Waterfront band is a predecessor that featured musicians who would later form The Stones Roses, and The High was formed after the Stone Roses made their mark. Both records should please fans not only as collector’s items, but also because the songs are good.

“Normandy”/“Where The Wind Blows” was previously only available as a limited run cassette distributed by The Waterfront back in the 1980s. The band included future Stone Roses members Andy Couzens, John Squire, and Gary “Mani” Mounfield. The Waterfront brought an appealing working class feel to these songs, or in the case of “Normandy,” perhaps not being employed at all. Backed by a sparse arrangement that calls to mind The Clash, it describes feeling cold, hungry, and alone while walking along the beach. “Where The Wind Blows,” with its loping bass guitar and band members whistling, seems a bit silly coming from the guys who would go on to found The Stone Roses, but it’s still fun. When the remastered “Normandy” was released on vinyl for this year’s RSD, it helped raise money for The Christie Hospital in Manchester.

The High, led by Andy Couzens after his success with The Stone Roses, pursued an atmospheric rock approach on its two albums. “Say It Now” was originally recorded as a demo and never made the cut for those releases. It sounds majestic in the recently remastered version, with lines like, “I never looked back” and “You have thrown it all away” spinning the tale of a faltering relationship. The extended shoegazer arrangement (over five minutes) is built on shimmering guitars and expansive keyboards. “Sugarpuff,” a song about starting over, was recorded in 2015 and has an infectious energy reminiscentt of The Cure. Couzens recently brought The High back to life with a few different members.