Jack Scratch - If Only 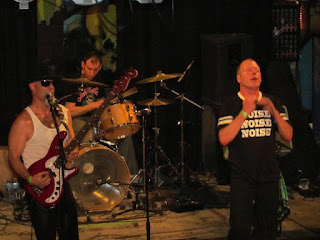 The recently released EP If Only is the second effort from Jack Scratch since the Chicago punk veterans returned from a 20-year absence in 2012. It's also part of vocalist Dave Bergeron's mission to bring back the aggressive music he and several musicians created in the Norwood Park neighborhood back in the mid-1980s. Northwest Highway, released by the Bergeron-led Norwood Park All Stars in 2012, did a fine job of covering that same territory. It looks like Bergeron and his mates have traveled a bit over the years, but they haven't lost their Chicago roots.

Bassist-vocalist Bob Byrnes once again joins Bergeron throughout If Only, along with new member drummer-vocalist Teak Barton. Guitarist-vocalists Earl Letiecq and Fran Kondorf and drummer Keith Robbins from the full-length Jack Scratch 2012 CD, are among the other musicians helping out on some of the tracks. Jack Scratch deviates a bit from its relentless approach on "Hey Wah Nee Hey Ho," a more mainstream track with hint of country music. The energetic "Do That For" is more impressive as the band opts for hard rock, but the real standout is "If Only For A Moment," which taps into the catchy punk of The Buzzcocks. The blazing closer "Gotta" is another prime example of how Jack Scratch mixes call-and-response vocals and hard-edged musicianship into its distinctive sound.

Jack Scratch has a CD release party planned for September 26 at the diPiazza club in Long Beach, California.
Posted by Terry Flamm at 10:53 AM