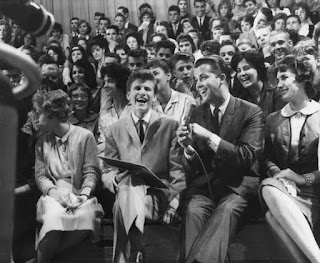 Thanks to everyone who dropped by my Rock And Roll Memorabilia Yard Sale this past Saturday. I had a chance to meet a few music-related Facebook friends in person, and engage in conversations about the history of Chicago rock and the local club scene. As for the sale, people mostly went for the vinyl and books, leaving me with a surplus of very cool magazines from over the past few decades. Maybe I'll try a pop-up store in Block 37 downtown the next time.

In a similar vein, Schubas Tavern will be hosting its fifth annual Record Dig this Saturday, starting at noon. Vendors selling new and vintage CDs and vinyl will include Reckless Records, Dusty Grooves, Beverly Records, HoZac Records, Rob Gillis, and Matt Sohn. Food and beverages will also be available.

Ken Mottet, who was a funny and informative Master of Ceremonies for the recent Minstrel Palooza at Durty Nellie's, has another hosting gig coming up this Saturday at Rosie And The Rivets Present: Vintage Rock N Roll Theater Show. It starts at 8:00 PM at Beatniks on Conkey in Hammond, IN, and is described as an American Bandstand type of variety show.

The night will belong to Patti Smith on October 11 when she visits the Lund Auditorium at Dominican University in River Forest to discuss her upcoming book M Train. The event, sponsored by The Book Table store in Oak Park, is sold out.

Garbage in, Garbage rocks. Garbage, led by vocalist Shirley Manson, will be at the Riviera Theatre on October 17 to celebrate their debut album with a 20 Years Queer show.  Torres is the opening act.

Although it still hasn't caught on nearly as much as Record Store Day, the third annual Cassette Store Day takes place on October 17 in Europe, Australia, New Zealand, and America. The event is geared more toward the indie rock crowd, with releases coming from acts like Green Day, The Blank Tapes, and Poster Children. There are also some various artists collections on the list. In Chicago, Bric-a-Brac Records, at 3156 W. Diversey, will be participating.

The Chicago-based indie rock band The Handcuffs will have a special Cassette Store Day release called All The Way From Chicago that will include 10 songs carefully chosen from their three CDs, plus a cover of Mott The Hoople's "All The Way From Memphis." The cassette will feature cover art by Swiss artist Mark Staff Brandl, as well as a Handcuffs baseball card.