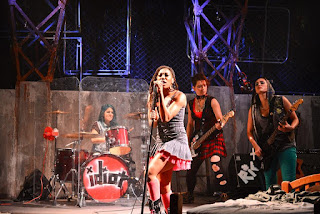 A few events coming up this week.

Belinda Carlisle, lead vocalist for The Go-Go’s as well as a successful solo artist, has a show tomorrow night at The Arcada in St. Charles. Tickets start at $39, the show starts at 7:30 PM. The local five-woman band Serendipity is the opening act.

The Romantics will be at First Merit Bank Pavilion at Northerly Island in Chicago this Thursday night. They’re appearing as Rick Springfield’s special guests, along with Loverboy. On Friday, September 11, The Romantics will share a bill with Berlin and The Smithereens at the Diamond Desert Casino in Sahuarita, AZ.

The Chicago-based theatre company The Hypocrites is staging a scaled-down version of Green Day's American Idiot that's decidedly different from the Broadway hit. Chicago Tribune critic Chris Jones was particularly impressed with the cast, stating their "collective performance is amped-up, pushed to the limits, driven from the heart, and like Katie Spelman's very personalized choreography, intensely committed to the whole." Jones had some qualms about the production, but rated it as "a significant achievement." The Hypocrites' production of American Idiot runs through October 25 at The Den Theatre on Milwaukee Avenue. Tickets range from $28 to $36.

He Knows What He Wants. Jules Shear, who has written hit songs for The Bangles and recorded a number of well-crafted pop tunes on his own, is employing a unique method of getting his songs out to the public. Working without label support or crowdfunding, Shear has a new tune called "The Words” that he’s making available for a free download on Soundcloud. More free songs will follow, and Shear says all he’s asking in return is that people Like his Facebook page and spread the word about this project.

Mooner released a video today for “Alison,” a catchy, guitar-driven track that will be on its upcoming album Masterpiece. The Chicago-based band has a record release party set for October 9 at The Hideout. The power pop/glam rock band Indonesian Junk and provocative performer Bobby Conn, performing with his wife Monica Boubou, are also on the bill.

Mary-Arrchie Theatre kicks off its 30th and final season this week with a production of the Peter Morris two-performer play Guardians. It’s a hard-edged look at war-time atrocities. Artistic Director Rich Cotovsky recently broke the disappointing news to the media that his critically acclaimed storefront theatre is losing its long-time performance space and has decided to call it quits when the current seasons ends in 2016. Three more productions are on the way, and there will be a 28th Annual Abbie Hoffman Died For Our Sins Theatre Festival.

The latest issue of Streetwise has a Fall 2015 Concert Guide, and a feature on the Chicago Jazz Festival. Back in the early 1990s, I was one of the first people to write for Streetwise, a publication that's dedicated to helping homeless people get back on their feet again. It's nice to see it still thriving and covering the Chicago arts scene. So be sure to buy a copy from one of the vendors you see around the downtown area.
Posted by Terry Flamm at 9:07 PM