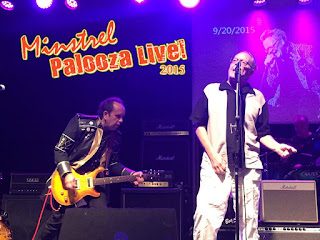 Photo of Cliff Johnson and a member of The Raine from from the Minstrel Palooza Facebook page.

Congratulations to the organizers of last Sunday's Minstrel Palooza Live! 2015 at Durty Nellie's in Palatine. The event, which celebrated the Minstrel Music store in Niles, drew a good-sized crowd throughout the bulk of its nine hours, and the bands followed almost immediately after one another. Ken Mottet, a musician/media personality whose Showmen's Rest CD was reviewed here this past June 8, proved to be an engaging MC. He shared anecdotes and quips like he was doing a radio show.

All of the acts went over well, but the strongest performances came from The Gus Adonis Experience; Van Go, and Cracked Actor. Still, the highlight was undoubtably Cliff Johnson's guest appearance with The Raine. I had never heard of The Raine, but apparently they started in the 1980s. It quickly became clear they'd be a perfect match for Johnson. If anyone has any info on this band, I'd be happy to share it here on the blog.

After a glowing introduction from The Raine's singer-guitarist, Johnson strolled out onstage and started belting out "Stay In Time" from Off Broadway's stellar debut On. He was also impressive on "Showdown" and "Bully Bully," and did his famous medley of hits during "Hang On For Love." This was the third multi-act event I've seen at Durty Nellie's, and I'd to see the venue to more of them.

As posted earlier this week on Broken Hearted Toy, I'm having a Rock And Roll Memorabilia Yard Sale tomorrow from 11:00 AM to 6:00 PM. There will close to 400 items for sale; including albums and 45s, cassettes, CDs, magazines, books, trading cards, posters, buttons, and all sorts of cool things I've collected over the years. Everything will be priced at $1 or under, so come on by for a fun trip down memory lane. My address is 35 East Slade, in Palatine, IL.
Posted by Terry Flamm at 10:40 PM