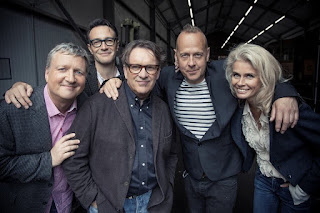 I just received the copy of Cradle To The Grave I pre-ordered from the Squeeze website. It's the band's first official release of new material in 17 years, not counting the Arse About Face demo EP that Squeeze sold at its concerts in 2012. Cradle picks up two songs from that release; "Top Of The Form" and "Honeytrap." I'll be posting a full review in the near future, but my first impression is that this is a collection light and catchy songs with harmony vocals that capture the classic Squeeze sound. Squeeze has a pair of shows coming up on November 27 and 28 at the Park West in Chicago.

Just in time for the holiday gift-giving season. As reported in this past Thursday's Chicago Tribune and on Terri Hemmert's Breakfast With The Beatles program this morning on WXRT, there's a mind-blowing sound and vision repackaging of The Beatles' 1 album coming out in early November. The concept involves matching each chart-topping hit with a short promotional film created by The Beatles around the same time. The 27 tracks will be in new stereo and surround-sound mixes. There's a deluxe version that comes with over 200 minutes of Beatles promotional clips and a 124-page, illustrated hardcover book.

In yesterday's Saturday Slumgullion, I mentioned Chicago's upcoming Chi-Town Rising New Year's Eve festival without passing judgment on its rather smarmy name. Chicago Tribune columnist Mark Caro didn't hold back; asking on Facebook, "Can any self-respecting Chicagoan really embrace something called Chi-Town Rising?" His followers responded overwhelmingly against the name, with at least one suggesting that it was the clueless work of an out-of-state ad agency. Makes you wonder if instead of the ball dropping, the countdown to 2016 will involve a giant deep-dish pizza.

The work of three of rock and roll's best photographers, Pattie Boyd, Henry Diltz, and Carinthia West, will be featured in the Visions Of A Magic Time - Iconic Photos of the 60s and 70s exhibit that recently opened at the Hilton / Asmus Foto gallery on Wells Street in Chicago. It runs through October 30th.

As I mentioned on Facebook a while back, I'm going to have a Rock and Roll Memorabilia Yard Sale next Saturday, September 26 from 11:00 AM to 6:00 PM. Everything will be priced as $1 or under, and that includes CDs, 45s, LPs, cassettes, buttons, books, trading cards, greeting cards, magazines, and numerous other rock-related items. My address is 35 E. Slade in Palatine (about a five-minute walk from Durty Nellie's) so come on by to say hello and maybe pick up a few fun items. I'll do another post in a few days with more details on what I'll have for sale.

And don't forget, Minstrel Palooza is going on right now in Palatine at Durty Nellie's. See yesterday's Saturday Slumgullion for more info on that event.
Posted by Terry Flamm at 2:50 PM