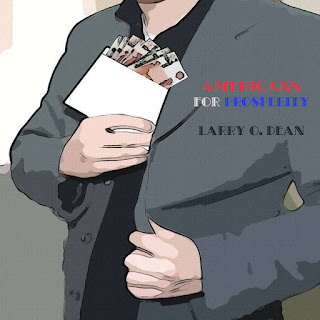 Anyone who has ever wondered how The dBs would sound if they took up social satire should listen to Larry O. Dean's new CD Good Grief. A published author as well as a singer-songwriter, the Chicago-based Dean has been working the outer edges of the rock scene over the course of 13 solo albums and with the bands The Injured Parties and Post Office. He recruited dBs founder Chris Stamey to produce Good Grief (Stamey had previously produced a Post Office effort) with the result being a dozen songs filled with acerbic observations, jangling guitars, and catchy melodies.

Dean's approach can range from the light and clever "(Driving) Under The Influence (Of Love)" to the disturbing "Sniper," which is from the point of view of an American soldier forced into the title role. Dean is assisted here by guitarist George Friend, drummer Lance Helgeson, bassist Dann Morr, and vocalist Amy Russell. Occasionally, his distinctive, talky vocal style can oversell the humor, as on "Botox Party," and it also diminishes an otherwise slinky and fun cover of the Translator classic "Everywhere That I'm Not."

Dean is at his best when his barbed lyrics are matched with more energetic arrangements. The first single, "Americans For Prosperity" takes aim at money-grabbing corporate kingpins, while "Mad In The U.S.A." delivers a rapid-fire attack on HMOs ("It's all the same if you're dying or you're fine") and other frustrating aspects of American society. Good Grief will be released on September 25.
Posted by Terry Flamm at 12:24 PM

Thanks for the review, Terry! Just for the record (pun intended): "Americans for Prosperity" is a standalone single that was released August 28th; it's included as a bonus track with download of the CD. Dann and Amy contribute to the single, but Lance (along with Howie Kantoff) also plays drums on the album, along with George on guitar and a host of others also contributing. Good Grief was produced by Chris but the single was self-produced. Just dotting my I's and crossing my T's -- appreciate the review, and take care!