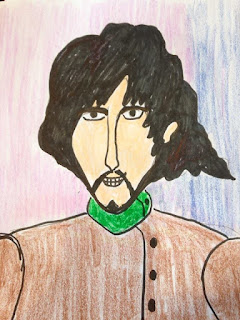 Various items from the rock and roll world.

Lollapalooza was another rousing success this year despite serious weather that caused a brief evacuation Sunday afternoon and an earlier end to the festival than had been planned. Out here in suburban Palatine, we had hail stones that were literally the size of golf balls, but luckily the revelers downtown were spared that experience. In other Lolla news, there were reports that Paul McCartney did an extended sound check Thursday night and his songs could be heard all over the downtown area. I doubt anyone complained.

A special tribute show called The Music of George Harrison is taking place at City Winery - Chicago tomorrow night, August 4th. Singer-guitarist Phil Angotti, who has become quite adept at honoring my favorite rock stars, will be joined by Casey McDonough; Dann Morr; Tommi Zender; Eric Howell; and Dick Schmidt, who will be performing with Rebekah Abel and Wally Rozak. Hannah Grossman will serve as the host and narrator. The music starts at 8:00 PM. Tickets are available for the just the performance, or for the performance with wine pairings.

Those who have seen bassist Derrick Anderson perform with The Bangles on a regular basis or with The Smithereens on occasion might not be aware that he was a member of a power pop band called The Andersons over a decade ago. He’ll be joining that group for a reunion on August 29th at Molly Malone’s in Los Angeles on August 29th. The Piper Downs will also be on the bill that evening. Anderson noted recently on his Facebook page that The Andersons could have more gigs coming up and are considering the release of a greatest hits CD.

Tributosaurus, one of Chicago’s best-known tribute acts, will become Crosby, Stills, Nash and Young this coming Wednesday night at Martyrs’ on Lincoln Avenue. I saw them cover CSN and Y at an outdoor festival a few years back, and they definitely have a passion performing as these guys. And yes, this qualifies as A Hollies Summer In Chicago event because it involves Graham Nash songs. I’m still waiting for Tributosaurus to become The Hollies.

Something new, something blurred. The Church will be showcasing songs from their 25th album—the brand new Further/Deeper—when they kick off their American tour in just a few days. The gigs will consist of two sets; the first being devoted entirely to their 1982 effort The Blurred Crusade while the second will be a mix of brand new and classic material. The Church have a show in Chicago at The Old Town School Of Folk Music on August 29th. They also have dates (none in Chicago) where they’ll be sharing the bill with The Psychedelic Furs.

Aimee Mann recently had a very touching post on Facebook about working on a song called “No Love” she had written with the late power pop genius Scott Miller of Game Theory and The Loud Family. She noted, “and hearing him sing it in my headphones is possibly the most devastatingly heartbreaking thing I’ve ever experienced.” Hopefully, we’ll get to hear that song at some point in the future.

Ryan Powers And The Secret Weapons, a local power pop band that released a very solid and enjoyable CD in 2013 called The Goodnight Goodbye Hour, will be performing at 4:30 PM this Friday afternoon as part of the Chicago Hot Dog Fest at Clark Street and LaSalle Drive. I haven’t eaten a hot dog in several years, but there are some intriguing things about this event, which runs through Sunday. One of its major sponsors is the nearby Chicago History Museum, and in addition to the bands and food vendors, there will be guest speakers (or comedians, I’m not sure) waxing philosophical about hot dogs. Admission is free.
Posted by Terry Flamm at 8:46 PM