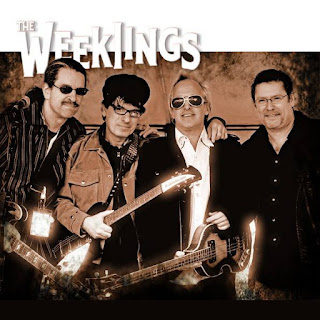 Due to a hectic schedule on the weekend of August 14 - 16, I was only able to make it to The Fest For Beatles Fans - Chicago at the Hyatt Regency O’Hare on the final day. It turned out to be 12 hours of almost non-stop action, involving live performances, panel discussions, contests, and a bit of treasure hunting. I’ve already gone over the Fest activities involving former Hollies member Terry Sylvester in a post last Thursday, so today, I’ll be concentrating on some of the other highlights.

The Weeklings had been on my radar for a while, so seeing their concert in the Grand Ballroom was a must. Regulars at The Fest For Beatles Fans will recognize guitarist John Merjave and bassist Glen Burtnik as being members of Liverpool, the first-rate Beatles tribute band that has been performing at this annual celebration for some time now. The concept behind The Weeklings, which also includes guitarist Bob Burger and drummer Dave Anthony, is to create a cohesive mix of Beatles songs and original tunes that sound like they could have been done by The Beatles.

Most of the cover material was composed by John Lennon and Paul McCartney or George Harrison but was never officially released by The Beatles. They were either handed off to other artists in Brian Epstein’s stable or tossed aside until they finally saw the light of day via the Anthology series. And as other critics have noted, even The Beatles' castoffs are often rock and roll gems.

As with Liverpool, all four members of The Weeklings are capable of singing lead vocals. Their rousing performance at The Fest For Beatles Fans  - Chicago featured Harrison’s “You Know What To Do” and the Lennon-McCartney compositions “One And One Is Two,” “I’m In Love,” “It’s For You,” “If You’ve Got Trouble,” and “That Means A Lot.” Merjave and Burtnik are long-time masters of covering The Beatles, and their additional partnership with Burger and Anthony also works extremely well. The Burtnik-Burger originals were catchy, fun, and steeped in the mid-1960s. The Weeklings succeeded in delivering all the songs in a seamless performance, and tossed in some brand new stuff (Beatles and their own) that will be on the follow-up to their official debut Monophonic.

After their performance, The Weeklings met fans in the hallway outside the Grand Ballroom to sign autographs and sell vinyl and CD copies of Monophonic. I’m hoping to post a review of this album in the near future.

Prior to The Weeklings’ concert, I caught the tail end of an interview with Bob Eubanks being conducted by journalist Tom Frangione. Eubanks is best known as the host of The Newlywed Game TV show back in the 1960s and 70s, but he was also one of the first air personalities to play The Beatles on the radio and he booked them to perform at Dodger Stadium in 1966. He exuded the same easy-going personality and humor he specialized in back in his game show days, and explained that part of his approach came from watching Johnny Carson on The Tonight Show. Eubanks also offered interesting insight and anecdotes relating to the early days of rock and roll radio, and how he struggled to find financial backing for his plan to bring The Beatles to Los Angeles.

I also took a few passes through the The Fest Store and The Marketplace; two separate rooms that offered loads of Beatles-related books, records, and collectables. I miss the days when all the vendors were gathered in a downstairs huge room at the Hyatt Regency O’Hare, and I could swear there aren’t as many items for sale in this new format. Still, the The Fest Store and The Marketplace offered access to books like Anthony Robustelli’s I Want To Tell You - The Definitive Guide To The Music Of The Beatles Volume 1: 1962/1963, and Kit O’Toole’s Songs We Were Singing - Guided Tours Through The Beatles’ Lesser-Known Tracks.

Other books on sale included Chuck Gunderson’s Some Fun Tonight - The Backstage Story Of How The Beatles Rocked America: The Historic Tours 1964 - 1966; Andrew Grant Jackson’s 1965 - The Most Revolutionary Year In Music; and the massive, limited-edition Eight Arms To Hold You, which celebrates the 50th anniversary of the release of Help. Author Dave Schwenson, who wrote The Beatles At Shea Stadium, was also on hand to talk about his The Classic Rocker blog, and give a presentation about famous rock songs that were banned in Cleveland. Schwenson told me it’s ironic that Cleveland is now the home of The Rock And Roll Hall Of Fame.

In addition to vintage vinyl and publications, the shops at The Fest For Beatles Fans are a great way to discover what new and imaginative Beatles-based products people are creating. A prime example is Music City Minis, a company that uses a special shaping technique to create vinyl record art from classic albums by The Beatles, The Doors, Led Zeppelin and others. The company also used this technique to create Doctor Who and James Bond artifacts. Custom album shapes can also be created for lesser known acts or to be used for specials occasions. It’s a good idea to peruse The Fest Store and The Marketplace a number of times because it’s easy to miss something really cool on a single visit.
Coming up: The Apple Jam Stage, The Battle Of The Beatles Bands, and The Grand Finale with Liverpool.
Posted by Terry Flamm at 5:35 PM